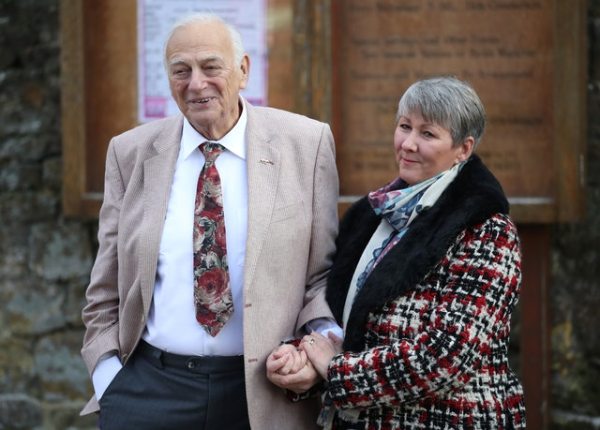 Roy was awarded the Order of The British Empire in 2004. As a veteran of Royal Command Performances, it was not his first time at the Palace- In fact he starred with Danny La Rue in “Danny At The Palace” in the ’70’s in their sell-out show!

Roy appeared in, or was connected with over Fifty Pantomimes in his career as Panto Comic, and latterly Pantomime Dame. He played Dame for the first time in at the age of 79 at Wilton’s Music Hall (in 2015) as Sarah The Cook. Not bad for a man who began in Show Business in 1957 at The Streatham Hill Theatre!

As a young comic, Roy joined Butlin’s Holiday Camps as a Redcoat in 1958, his fellow Redcoats included (Sir) Cliff Richard and Dave Allen. By 1959 he made his solo debut on radio’s “Workers Playtime”. Many years later in 1978, in the resident Variety Company, I had a few fun “Late Night Cabaret” evenings at Butlin’s Filey supporting Roy in his Max Miller Acts. We provided the opening cockney routines, and then Roy took centre Stage. 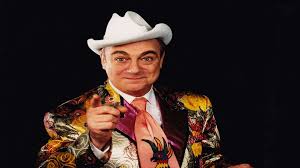 By 1978 Roy was known for BBC Radio 2’s “The News Huddlines” which started in 1975. Chris Emmett joined Roy in this topical half hour show that was to become the longest running Radio series of its time. It ran from 1975 to 2001. Originally Janet Brown was on air, followed by Alison Steadman, with June Whitfield taking over from 1984 until it finished in 2001. 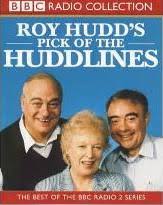 I  met Roy again when I was involved in fund raising for Wilton’s Music Hall a short while after working with him at Butlins. Roy was a seasoned campaigner for this, wearing his “I’m A Friend Of Wiltons” badge when raising funds to restore this jewel in East London’s crown. It was apt then that Roy and Debbie decided that Wilton’s would be the chosen venue for Roy’s pantomime Dame Debut in “Dick Whittington” in 2015, and to repeat this success the following year in “Mother Goose” at Wilton’s.

Roy wrote both Pantomimes, and Debbie Flitcroft Directed them at this historic venue. Roy said at the time “my model for Sarah The Cook is Mrs Shufflewick, for those who remember her. I shall just have one or two changes of costume. It saves on the washing, love”

In fact, Roy had a few more than two costumes. Designer Mark Hinton came up with some perfectly traditional costumes, and for two years I had the Autumnul joy of meeting Roy and Debbie at the costume store of The Kenneth More Theatre to select items to hire. I was truly honoured to be asked “Dame ” questions by Roy- from this veteran of over fifty pantos- “You’ve done this Dame lark a good few times. Do you think I should do a striptease?”. Debbie gave me a “Please no!” look and we moved swiftly on! Roy based his Dame not only on Mrs Shufflewick, but on his idol- Dan Leno. Roy always had a picture of the Greatest Mother Goose of all time on his dressing table, wherever he went. 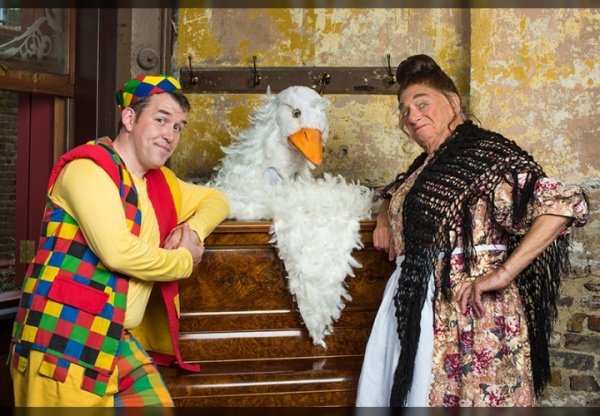 The Seventies were an incredible time for Roy Hudd. At the start of the decade he played the West End as Comic- giving his Max Miller Routine and Joining in Saloon Bar antics in sketches with Danny La Rue, and also by ’77 he was playing one of Dickens’s greatest villains- Fagin in “Oliver!” The Musical.

Danny LaRue at the Palace was the hottest ticket in town in 1970. Danny was the highest paid entertainer at the time, and patrons of hisWest End nightclub could now see him in the magnificent Palace Theatre on Shaftesbury Avenue. I loved this show, and saw it many times, but not as many times as Sherrie Hewson. Sherrie was at The RADA studying, and supplementing her income front of house at this show! 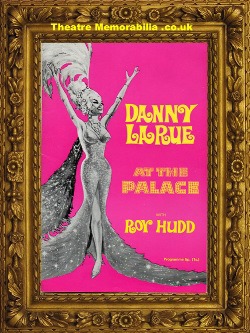 Roy was Guest Star and did his own “Miller Act” and played the Ukelele, did a stand-up spot and joined Danny, David Ellen and Toni Palmer in sketches. I loved the Cowboy sketch the best, with Roy as a sharpshooter!

Reviewing The Situation- there for the grace of me going to a succesful Audition at the Albery Theatre, being offered a part in “Oliver!” and discovering my dates clashed and I wasn’t available- I could have worked with Roy once again. Roy played Fagin in Lionel Bart’s “Oliver!” with Joan Turner. I settled for playing piano at “Macreadies” actors club each night, and on a few occasions watching Joan forget to leave for “The Half”. Funny old world.

Underneath The Arches at The Prince Of Wales Theatre London in 1982 was a personal triumph for Roy. He co-wrote and played Bud Flanagan in this musical tailor made for his skills, his charm and his professionalism. It earned him the West End Theatres award for Best Actor in a Musical in 1983- Those awards are now known as “Oliviers”. 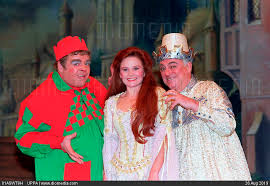 Appearances on The Good Old Days, tours and variety seasons were always forerunners each year to Roy’s passion for Pantomime. He wrote them, in particular I loved seeing the Watford Pantos with Chris Emmett that he created- and seeing Roy and often Debbie in Panto around the country. His favourite subject to appear in was generally “Babes In The Wood”, and he played Idle Jack, as well as Buttons in “Cinderella”. There were so very many pantomimes as Comic before his debut as Dame! Here are just a few of those Pantomime Posters from a lifetime of performing! 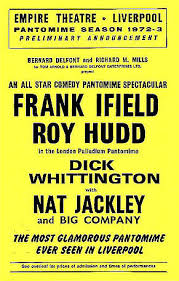 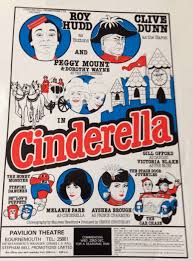 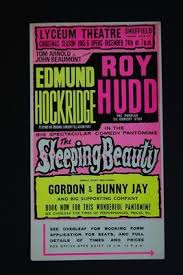 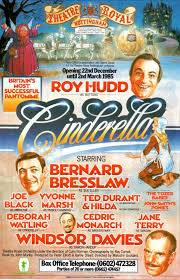 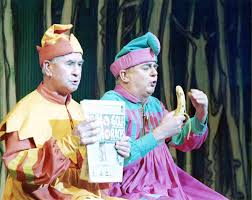 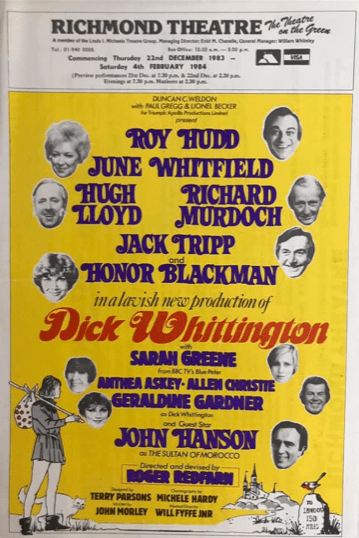 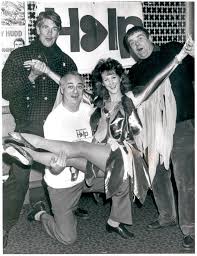 Roy with June and With Debbie 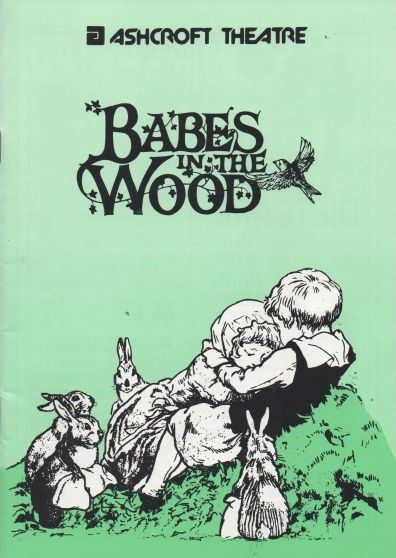 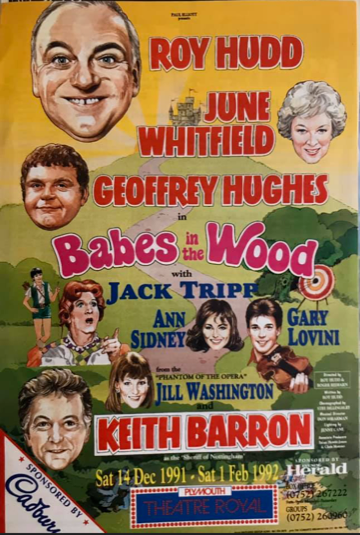 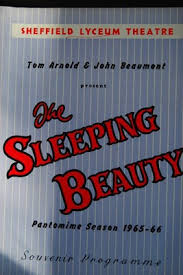 My thanks to Ian Howells for his help with the Pantomime Posters.

Roy wrote several books- I have all of them on my shelves- my favourites are Roy Hudd’s Cavalcade of Variety Acts, His book on Music Hall, Variety and Showbiz anecodotes , and his Music Hall collections.

He was on Celebrity Mastermind in 2014 answering questions on Dan Leno. His knowledge of things past was astonishing. In 2008 he played the Title role in “The Wizard Of Oz”at The Royal Festival Hall, and over a long career appeared in countless television programmes including his own- The Roy Hudd Show, and “The Illustrated Weekly Hudd”. He made appreances in Broadchurch, Benidorm, Holby City, Ashes To Ashes, Lipstick On Your Collar by Dennis Potter as well as New Tricks, Call The Midwife- The list goes on and on.

One of his recent accolades was being given the Lifetime Achievement Award at The Great British Pantomime Awards at Wimbledon Theatre.

Music Hall was his love and his life, Pantomime was also his passion. Television viewers will always remember Archie Shuttleworth in “Coronation Street” – from 2002 to 2010 , as well as his repertoire of characters in plays, from Priestley to Wilde. As recently as 2019 he appeared alongside Liza Goddard and Isla Blair in “A Woman Of No Importance”. 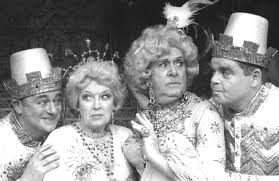 Roy was a man of real importance. A towering genius of a man who, as everyone will tell you, was one hell of a nice bloke.Our thoughts and love go out to Debbie and family. So proud to have known you Roy- as you said as Max Miller- “There’ll never be another!”