The Pantomime Roadshow returned home after five weeks of Panto promotion and Fun around the UK.

The First two weeks were for The Kenneth More Theatre, Ilford- touring schools in the London Borough of Redbridge and further afield to Newham and to East Ham. For these two weeks Andrew Ryan and I were joined by Grant Alvarez on our travels, with ten performances a week for the fortnight. Many thanks to Steven Day and the KMT for this opportunity to bring the Magic Of Panto far and wide! 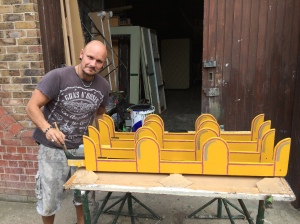 Leaving London we headed to Darlington to represent the Civic Theatre- huge thanks to Qdos for arranging this . For these ten shows we were joined by Roadshow veteran Nathan Daniels. 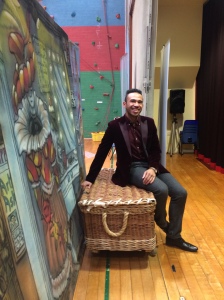 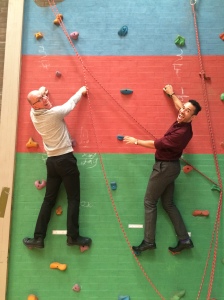 Many thanks to Chris Wellings at the Civic Theatre for looking after us so well. Andrew (Ryan) will be returning very shortly to direct Ashleigh, Pudsey, Brendan Sheering and my mate Nikki Evans in “Cinderella”, before heading straight to his own rehearsals to play Widow Twankey at the Birmingham Hippodrome. 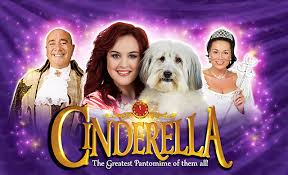 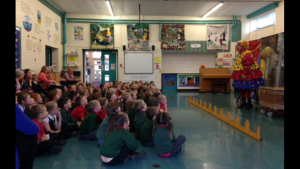 Leaving Darlington we headed the short hop to Newcastle and the Theatre Royal for another ten performances, arranged by Michael Harrison and Qdos– many thanks also to Ian Wilson for organising. Nathan appeared with us this week also, as well as fitting in performances at The Boulevard, Newcastle! 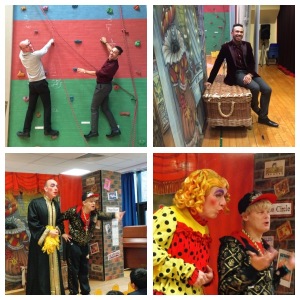 Kim Hoffman did a splendid job organising the week, and getting the press along. We got the chance to catch up several times with Chris Hayward, Dame Rita FitzFenwick in this year’s “Dick Whittington”, and he very kindly called in to our Friday show to take part in a Q&A session with the children afterwards. Thanks Chris!

Here’s what the Northumberland Gazette had to say about the afternoon:

Pupils at Ponteland’s Darras Hall First School were treated to a workshop by the cast of Newcastle Theatre Royal’s upcoming production of Dick Whittington on Friday.

The roadshow involved a 45-minute play going behind the scenes of the panto and giving children the chance to learn all about the traditions of pantomime, as well as seeing what goes into putting on one of the seasonal shows.

Peter Tincombe, Headteacher at the Broadway school, said: “We are very fortunate to have benefited from the visit of the pantomime roadshow, which the children have hugely enjoyed.

“Opportunities afforded by the roadshow are immensely valuable, both for providing high-quality enjoyment and also, perhaps most importantly, to provide our children with the chance to work and perform with professional actors in front of an audience of their peers.

“The performances today will fondly remain with the children for many years.”

A short play was followed by a question-and-answer session, and there was an opportunity for a handful of children to try out the show’s costumes for themselves.

The show’s real-life dame, Chris Hayward, was on hand to answer questions.

“When I used to do panto all over England, we used to go into the schools and do chats, but this is the first time I’ve done anything like this near Newcastle,” said the 51-year-old.

“It’s funny what some of the kids talk about. One asked ‘what were you like when you were a little girl?’, and they don’t understand, but it’s nice to be involved with it.

Fellow cast member Nigel Ellacott added: “It’s a wonderful opportunity for the children to learn where panto comes from and its fairytale traditions – how we dress men as women and used to have ladies dressed as men, as well as the educational elements of increasing their vocabulary to include theatrical terminology.” 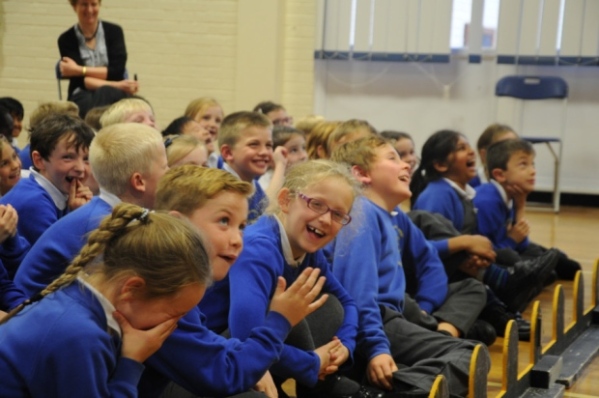 Talking about returning to Newcastle again, Hayward added: “I love it.

“I love doing panto here, and the audiences are always brilliant, and there are really busy, good houses every day and, of course, it’s nice to be home.”

We left Nathan behind to do his three Boulevard shows as we headed for North Wales and the joys of Llandudno. Before starting the last week of ten shows, Andrew and I caught up with our mate Sherrie Hewson and enjoyed a jolly Sunday up the Orme and catching up on her CBB news! There was a lot of it, as you can imagine! 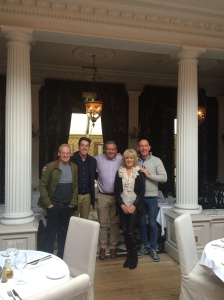 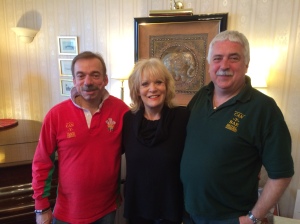 Osbourne House & The Can Y Bae

Sherrie is off to Leicester for Panto this year at the De Montford Hall. 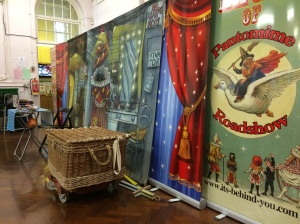 Monday saw us joined once again by Grant, and ten shows for the Venue Cymru. Thanks to Sarah Ecob and to Karin Bruns for a lovely week, taking in some of the most gorgeous scenery as we travelled from one school to another. 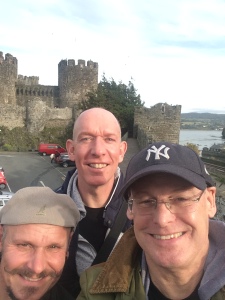 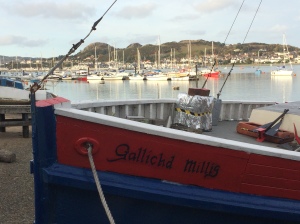 Truly “Mae hen wlad fy nhadau” is a glorious place, and I am very excited to be here once again for Panto giving my Nanny Myfanwy. (Thanks to Lee Redwood for suggesting the name!).

We stayed, as always at the Can Y Bae, my home for Panto of course, and were looked after amazingly by Michael and Dave. I’m back there in about five weeks time, hopefully with my lines for “Snow White” learned!

On the Wednesday we played Theatr Colwyn, performing to over 200 schoolchildren in the afternoon, and to Coleg Llandrillo in the morning,giving them a taste of the Panto mayhem to be found in “Snow White” this year! Thanks to Phil Batty, Aidi Jones and the crew for sorting us out in this jewel of the theatre in Colwyn Bay.

We missed John Evans by four days! John was at Theatr Colwyn on Saturday with his show raising funds for the local arts and filming a DVD. Look forward to viewing that between shows! 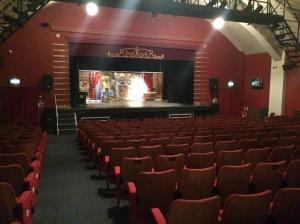 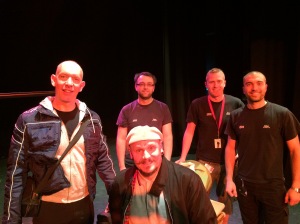 Five weeks. Something like forty eight performances (and eighty four get-ins and outs!) great company, always great food (!) and about 3,000 children a week entertained and, we hope educated in the magic of Pantomime!

To all concerned, thank you so much!

We received sad news here at IBY that two friends have left us this week- Gordon Jay and Peter Baldwin. I had the great joy of working with Gordon & Bunny Jay in Summer Season, and having Peter Baldwin as my “Dad” , Baron Hardup in Pantomime. Both lovely and warm people, and sadly missed by friends and family.

Gordon Jay’s funeral will be held this week on Tuesday October 27th at Holy Ascension Church, Upton By Chester CH2 1DJ where he lived. The funeral service is at 1pm, followed by a private service.

I first met Gordon when I auditioned for a Summer Season for Butlins Variety Theatre, Filey. We were introduced by William (Bill) Dickie who presented the show for his company SADFU, and through Richard Stone’s agency.

I was lucky to be taken on board, and to do one of the last “Big” variety shows in Filey, with a full orchestra and a chorus, with Gordon directing and he and Bunny starring, and at Scarbourough in the Grand Hotel cabaret rooms. Gordon took me under his wing, and taught me things that have been invaluable to me in shows and in Pantomime.

He and Bunny were masters of quick fire timing. They did not pause, or “hang about” with a line or a cue, and Gordon instilled a level of professional conduct and reverence to tradition that can only be passed on to others. I became his tennis partner most mornings, even though I had never played. He showed me how to play “Musical bottles”, to never move on a punch line, and how to make a laugh last longer- he and Bunny were the perfect double act. Everything Gordon taught me I discovered when Peter Robbins and I teamed up for the next twenty eight years.

Thank you Gordon for introducing me to Paddy Dickie who became my friend- one of this country’s finest costumiers, sadly missed- and thank you for showing me what goes into becoming a “double Act” in Panto. Here is a very brief resume of Gordon & Bunny’s career:

Stalwarts of the pantomime double act, Gordon and Bunny Jay appeared in Cinderella in Weston-Super-Mare and announced that 2005/6 was be their last pantomime season as performers. 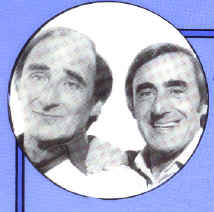 The brothers were born in Birmingham , and as their mother was “In the business” it was a case of “Following in Mother’s footsteps” from an early age. From dancing lessons and appearances in local theatres and charity shows they graduated to the world of variety, beginning with a dancing act that played in revue and on the variety circuit. 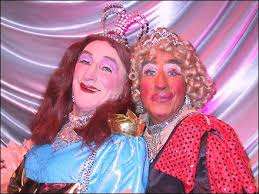 With a leaning towards comedy, they established themselves as a comedy double, but due to their musical skills were able to add songs, dance and musical speciality into their act- to this day no-one could rival their skill with hand bells and even “musical Bottles”, and turn their hand to impressive soft shoe shuffle.

They continued to be in demand for Summer season, cruises and pantomime with their unique style of double act.

The straight man, Gordon is constantly being harassed by the mischievous Bunny, and they posses a lighting fast quick fire “cross talk” that has made them pantomime favourites as Broker’’ men, robbers and Chinese policemen. At the New Theatre in Cardiff in 1982, with Ted Rogers, they illustrated the way to make a first entrance that had the audience in fits before they spoke a word- on their knees!

Almost without exception they have appeared in pantomimes throughout the country, with every major comic and star. From Sandy Powell and John Hanson at Wimbledon in the 60’s to the London Palladium in 1977 with Yootha Joyce, Brian Murphy and Richard Hearne as the Broker’s Men in “Cinderella they have brought pantomime comedy into a fine art form

In recent years they  also played Ugly sisters as well as King and Dame in panto, and were recognised as a comic’s comic double act.

They performed in 52 pantomimes. First at Salford Hippodrome in 1953 and their final panto on 8th January 2006 at the Playhouse Theatre, Weston Super-Mare for Paul Holman in “Cinderella”. 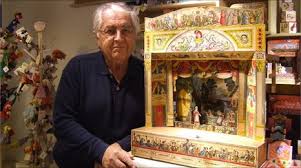 Peter appeared with Peter Robbins and I in Nottingham Panto. In 1997 he had just left the cobbles of Coronation Street” where his character Derek was “killed off” to the sound of “Tit Willow, Tit Willow..Tit Willow”, and plunged into the world of Pantomime as Baron Hardup.

This poster and its matching companion were given to Peter Robbins and I at the end of the Panto run by Peter. He had searched the antique shops on the Derby Road, and had them both framed, and I treasure mine very much. A lovely thoughtful gift from a truly lovely man.

I enjoyed our chats about his love of all things historical. He continued to be the manager of Benjamin Pollocks Toy Museum and store in Covent Garden, and I used to pop in there to have a chat, often getting confused if his Brother ( the mirror image) was there that day! 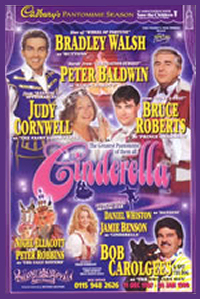 Peter was a funny, gentle and totally charming man. Our Panto time together was a joy- we both loved the history and stories of pantos past. Along with Judy Cornwall we would all head off for tea or dinner and have many funny and jolly times.

His death this week at 82 has left a huge gap. There have been many tributes from his theatre friends- from “Summer Holiday” and Theatre tours, and this is mine from the world of Pantomime. RIP Peter, a very kind and lovely man.