A very full and jolly day at my favourite theatre in the UK, the Hippodrome, Birmingham.

Just now the city is experiencing a new renaissance- in a week’s time the Grand Central shopping complex and the New Street station will emerge from the hoardings and scaffolding, a fabulous atrium style station complex to rival the Bullring- and where better to enjoy the buzz than here at the Hippodrome, where a band of volunteers are striving, with the help of lottery funding a fund raising, to preserve the heritage of this Theatre!

The Station about to emerge!

Meanwhile, on stage at the Hippodrome: 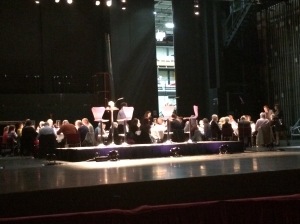 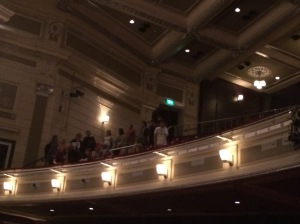 Andrew Ryan and I arrived in the morning and handed over two fabulous gowns, worn by Danny La Rue and now in our safe keeping. They went on display on the main stage, beautifully lit- I felt that Dan would be very proud of how it all looked. Tables laid out for a very special fundraising afternoon tea on the main stage, hosted by Midlands TV personality, Joanne Maling. Joanne made her early stage appearances here on the Hippo Stage, starting with a “Jack & The Beanstalk” with Russ Abbott and Bella Emberg!

Here is a photograph of Joanne and me from a business event last year. Two stunning red heads, I’m sure you’d agree! 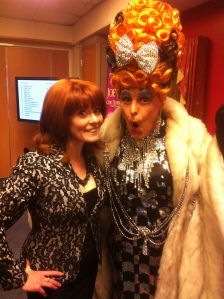 The foyer was alive with face painting, pop up shows and talks, and tours of the building. Two Music Hall style ladies were teaching children songs from the halcyon days of the Hippodrome, and Teresa Nalton at Qdos had kindly supplied some stunning “Aladdin” costumes to decorate the foyers.

For some excellent photographs taken by Paul Painter, click on the photos below: Stunning photos of the afternoon! 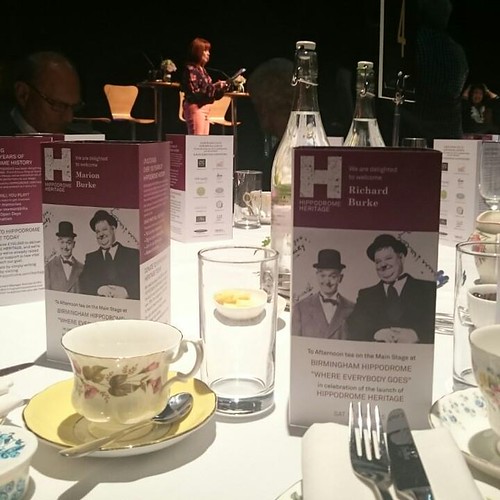 Talking of “Aladdin” pantomime- Andrew Ryan managed to fit in a press call in readiness for this season’s “Aladdin” before a swift Quick Change to join me and Peter Tod on stage for the Afternoon Tea and interviews.

Here are a couple of Andrew’s Twankey Moments at the Hippodrome this afternoon.

The afternoon was spent with Heart FM giving interviews about pantomime at the Hippodrome, and enjoying a fabulous afternoon tea on the main stage. Joanne asked Peter Tod, Andrew Ryan, and myself to join her in a chat about our Hippo experiences, and the several Pantomime Roadshows we have appeared in over the years, including “Tower” a show we toured about the History of the Hippodrome and its early beginnings.

At the end of the day we met up with Jenny Smith the project Manager, and With Rachael Griffin the Development Manager and recorded “Oral History” for the Theatre’s archive and interactive displays. I think I’ve recorded a podcast as well which will be on the Hippodrome site shortly. 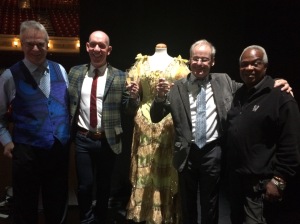 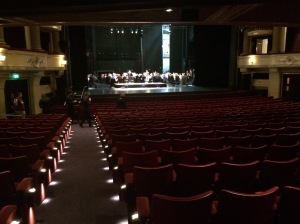 Thanks to our dear friend Mandy Rose for looking after us so well, and here’s to the next fundraising Heritage Event! 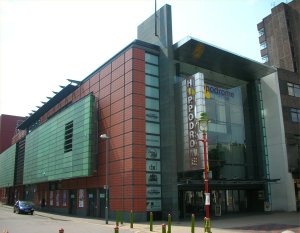 Off to Birmingham to celebrate a glorious Heritage!

Saturday 12th September is an Open House day at the Hippodrome with tours and pop up events to celebrate the new Heritage scheme that involves over thirty volunteers, a generous amount of Lottery Heritage financial support, and a huge amount of good will radiating around Birmingham’s premier Entertainment house.

Currently the home of live entertainment, of pantomime, Opera and the Home of the BRB, this house has presented pantomime for a great number of years. A Timeline in the bar and backstage area of the stalls explores this heritage in a fascinating way, and now an archive of physical artifacts and oral histories are being created for the future.

For full details of the days events take a look at this link:

During the day Andrew Ryan and I will be guests of the Birmingham Hippodrome Heritage, and taking part in intervews on the stage during the afternoon. There are tours and events from 10am through until four o’clock, when the stage will clear, and the auditorium will be given the once over to welcome Alan Carr to the theatre in the evening.

Andrew will be making an appearance as Widow Twankey before the Afternoon Tea event, to greet the phptographers in readiness for this year’s Hippodrome Pantomime “Aladdin”,under the watchful eye of our friend Mandy Rose,  and then join me out of costume on the stage where we have the great joy of joining Peter Tod, former Boss of this glorious building, for tea and interviews with Joanne Maling.

During the day I’m visiting Heart Radio to record an interview on my memories of the Hippodrome, and to spill the magic beans on a few Panto stories! Both Andrew and I will be recording our memories of appearing here with the Heritage crew in the Oral Histories project.

During the day visitors can drop off items they might like to donate to the Heritage archive, and record their own personal memories. 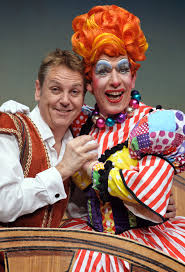 Andrew Ryan with Brian Conley in “Robinson Crusoe” at The Hippodrome

My memories range from the “Cinderella” in 1995 with Gary Wilmot, Judy Cornwell and Robin Cousins, with the beautiful voice of Paul Gyngell as Prince Charming. Sadly Paul is no longer with us, but this year I will be directed (for the second time) by his brother Michael at Venue Cymru. Jodie Jackson was “Cinderella”, Carole Todd directed.

I will be recalling the “Cadbury’s Pantomime Roadshow”- it began here in 1996, and to my great pride, it continues to this day- we set off on the Panto Roadshow in a week’s time, taking in East London, Llandudno, Darlington and Newcastle.

For some of this year’s “Roadshow” we will be joined again by Nathan Daniel- Nathan made his first Panto Appearance with Peter Robbins and myself at the Hippodrome in the 2006 “Cinderella” with Brian Conley and Shobna Gulati, along with Dawson Chance, Sean Needham (Currently in “Kinky Boots”) and Jody Crosier joining Michelle Potter.

Linking both the 1995 and 2006 Pantomimes- the late and much missed Ian Sandy. He will forever be associated with the Hippodrome. So very much appreciated and missed by us all. 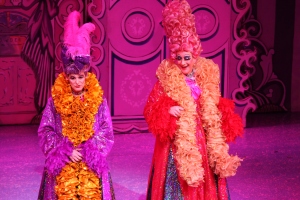 Ian joined us in the “Tower ” Pantomime tour we did in Birmingham during the restoration of the building. Commisioned by Peter Tod it involved AndrewRyan, Ian Sandy and myself joined by local lady Lorna Laidlaw- now know to viewers as Mrs Lundy in “Doctors”.

So many glorious memories- The annual Arts Fest, the Silver Gala re-opening in 2001, and the many many friends  we’ve made here. My oldest Hippo friend is Tom on the Stage Door, who first greeted me when I toured here with “Wind In The Willows” and “Christmas Carol” way way back when!

A glorious day. If you are in the area, call in and join us!