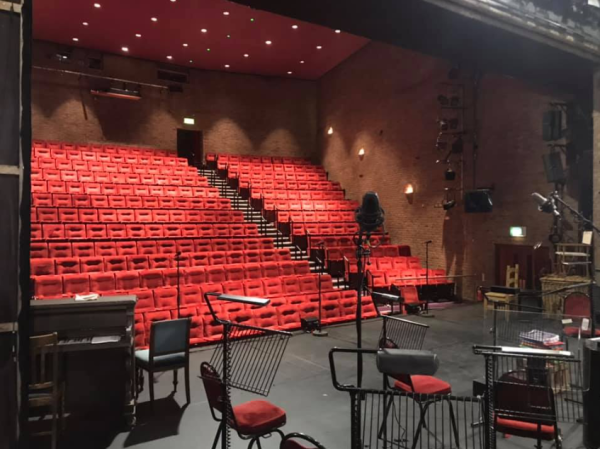 The KMT opened on December 31st 1974. My brother, Vivyan Ellacott had moved from The Swansea Grand Theatre to Ilford to oversee the building and creation of the new theatre. He had been at Swansea from 1966 to 1968- then during rebuilding went to Wimbledon Theatre, and returned to Swansea Grand 1969 to 1973.

Pantomime had been a huge tradition at Swansea, where they often ran up until early March, and Vivyan created and Directed them here from 1975 up until his retirement after the 2010/11 Pantomime. Steven Day carried on the tradition and Directed each panto from 2011 to last year’s “Aladdin” 2018-19. 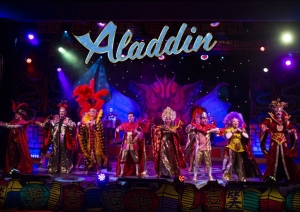 Vivyan Ellacott has a website that lists (among many sections on Musicals and Theatres) every KMT Pantomime since the first “Dick Whittington” in 1975. Here’s the link

Steven Day Directed Eight of the KMT Pantomimes. As a performer he had appeared in two previous pantos, and as Music Director he was involved in five previously. He too began his career here at the KMT.

The Theatre’s Pantomime for 2019-20 will be “Sleeping Beauty” produced by Anton Benson Productions for Vision- Redbridge Culture & Leisure who run the KMT as from September 1st 2019.

The KMT has been a huge part of my life since I first became involved in the ’70’s. It was here I started to design the costumes for the pantomimes-along with Margaret Brice- this led to designing tours- one lengthy job being The”Rocky Horror Show” in UK and Europe, and once at The Casino De Paris! Two costumes from Margaret & I are currently on display at the V&A. A very proud moment for us both.

It was at the KMT I did my first “Sister” with Peter Robbins in 1981 (never dreaming it would continue for 28 years!). It was here I “invented” my first Dame in 2009 and received amazing support from everyone 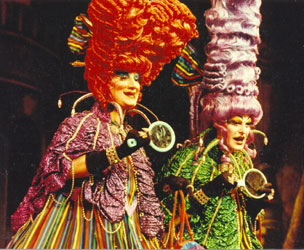 .It was with great sadness I was told in May that the KMT as we knew it, would be closing. At that point the future was uncertain, but the company who ran KMT (Redbridge Theatre Company) would not be continuing in this building after August. This is my first Summer NOT costuming a pantomime since the ’70’s! 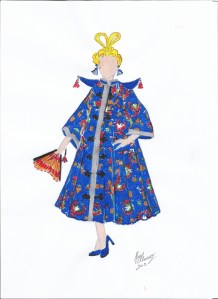 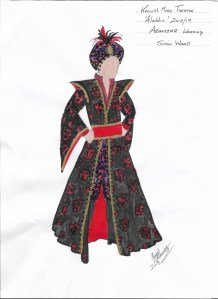 As you may have read in the previous article, I had stored my own Panto creations here for over thirty five years, and Andrew Ryan’s fabulous Dame costumes were also stored. These we moved during the mid summer- and yes, it WAS Murder! Actually we did very well as I hope the article shows!

Steven Day Manager of the KMT had the task of de-cluttering the theatre of forty odd years accumulation,  and also of selling the assets of the company to ensure it remained solvent for future presentations in the area. IBY regulars will have noticed Panto Costume Sales advertised on the message board. 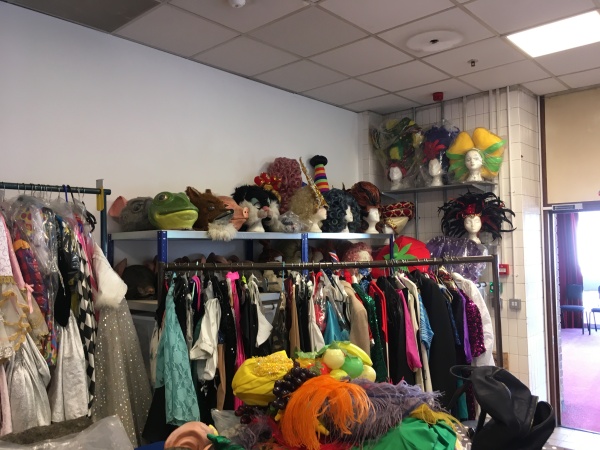 The entire stock of panto costumes were sold to various production companies, The Wigs were bought almost entirely to take on a new lease of life around the country,( All created by Bodyline) and those hundreds and hundreds of designs and untold hours of work by Margaret Brice, and makers like Mary-Ann Trigg, Meryl Herbert, Shirley Davis,Marie Webb, Frank Kershaw, Tony Wright, and further back Madam Kuldana and Frank and Tish Winter- the list is endless- They will all have new Panto homes! 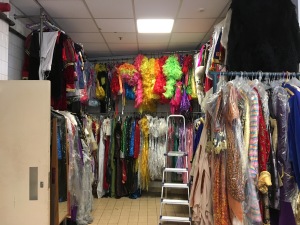 It is so sad to see a building you have virtually lived in slowly denuded. Even worse to see Empty Seats in the auditorium- but not for long. The building will spring into action and return to doing what it does best- Entertaining Ilford.

I put together a collection of photographs during this Summer- The scenic cloths and furniture have now gone to a new Panto store and will be seen in various theatres each year- the spare Pantomime Roadshow sets I had (We’ve been doing this show over twenty years!) have gone to a school and to a Drama College. 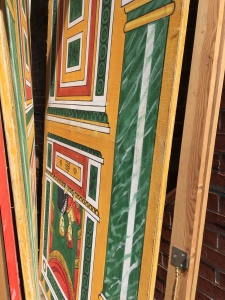 Although it is sad to see those empty spaces, it is heartening to think theatre has ALWAYS recycled. Before it was fashionable- Theatres always thrived by thrift!

A big building with two large stores across the road, and a further store across in the Town Hall! Inside the building you can see the “Long Corridor” that housed Wigs and Accessories, and a view of the dressing room chaos! 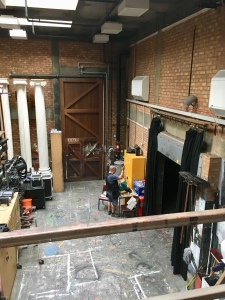 The mask (in a Tea Chest in one of the stores)  I had always known to be important, but decided to ask the V&A if they would like it- they have one already. This completes the set designed for English National Opera. Jocelyn Herbert was one of this countries most influential stage designers. She died in 2003. It is now safely stored at the V&A Museum. 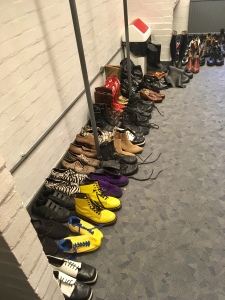 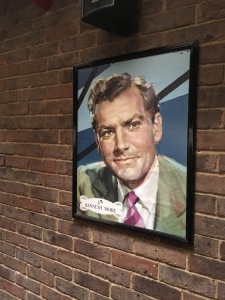 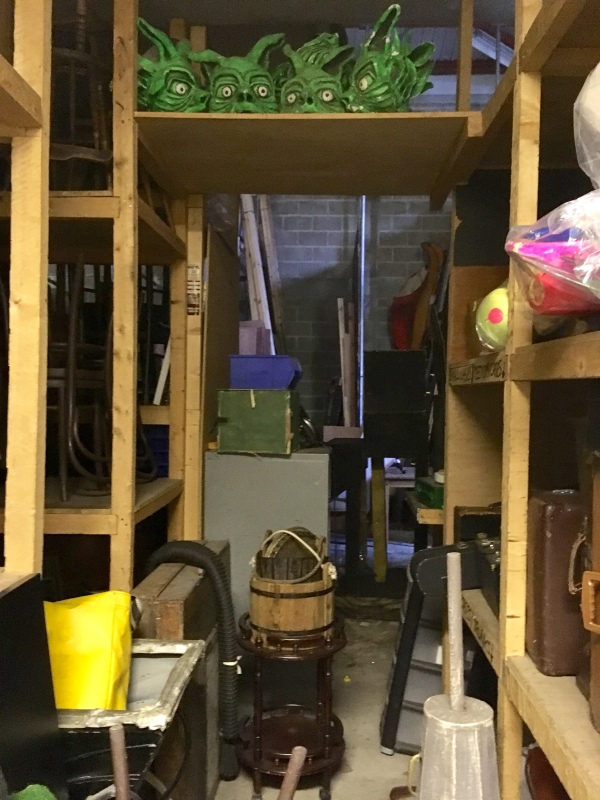 To celebrate the many companies, both amateur and professional that have performed at the KMT, and to honour the volunteers who kept the building running, Steven presented a one off farewell show. “A Night To Remember”. The Title.. well film buffs will get the reference. If you need a clue it was 1958. You’ll make the connection! 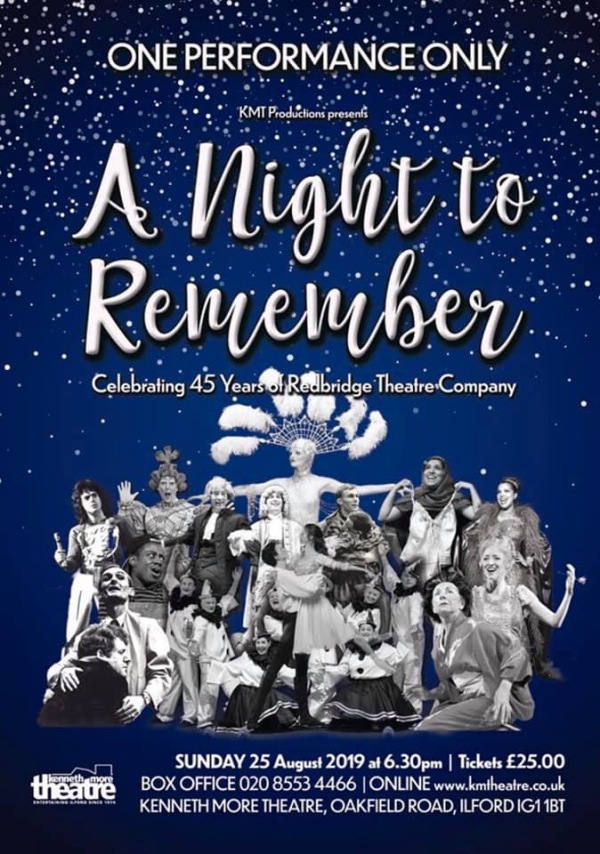 Some familiar KMT faces there- and here are a few more who were in or at the show. 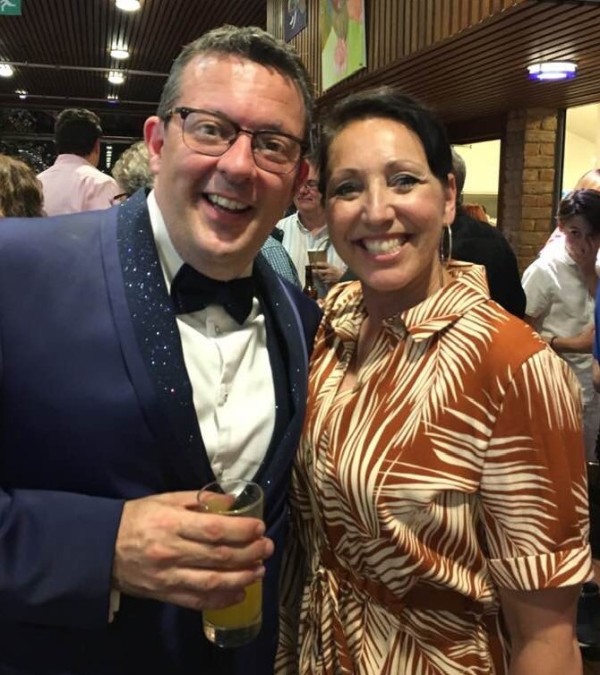 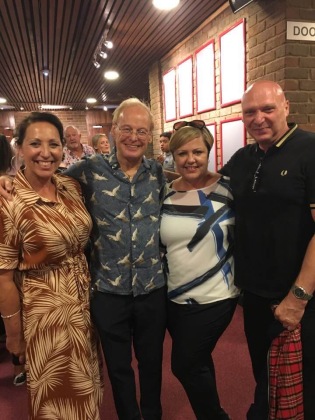 The Finale of A Night To Remember

The auditorium (Sold out for the farewell show) will once again be welcoming patrons once the new caretakers of this building present their brochure for the Winter months. The building- empty or full- it isn’t just bricks and mortar.In fact it isn’t the most beautiful building of those ’70’s designers dreams.. but it is a place that makes dreams. Fairy tales- once upon a times- we’ve all enjoyed memories, of performing here or seeing a show here- and some of us working here. It is the people that make the building. Here’s to Pantomime number forty five- “Sleeping Beauty”. It is the first of a new breed here- not “In House” but produced from outside , as Anton Benson says..” continuing the long standing tradition” of the Kenneth More Theatre. Long may it continue.