Peter Byrne died this week at Denville Hall,at the age of ninety,  where he has been a resident for the past five years. Peter was born in East Ham in 1928, and trained at The Italia Conti school in Clapham.

His Father had been a musician, and at one time was a member of Jack Hylton’s Band.

He started his career with The famous Will Hay Company- “although by that time unfortunately he’d finished making films by then”- and appeared at the age of sixteen in the Royal Command Performance in sketches with Nervo & Knox and The Crazy Gang. He recalled “The next day there were photographs of us in all the papers, with The King, The Queen and Churchill watching us!”

Peter became one of the most famous faces on television when he joined Jack Warner in the BBC Television series “Dixon Of Dock Green” as PC Andy Crawford. This was in 1955 and he remained with it for 430 episodes, over twenty years until 1976.

Peter had previously appeared in the forerunner to “Dixon” not in the film of that name, but in the stage version in the West End with Warren Mitchell. 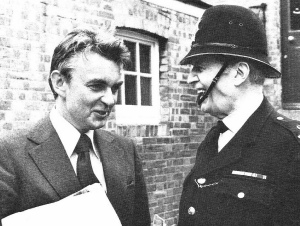 When I was growing up Saturday night was “Dixon” night on BBC TV. It began with a blue lamp and the familiar face of Jack Warner bidding us “Evenin’ All” as a new episode took place- twenty six years of BBC Drama, with Peter Byrne as “The Housewive’s Choice” as the matinee idol looking Andy Crawford. My Mother was a huge fan. When I appeared in pantomime with Peter my parents made the long trip from Swansea to Stevenage to see me. It was more for my Mother to meet Andy Crawford. It was a the highlight of my career in her eyes. I was working with her hero!

Peter was a leading figure in the world of Pantomime. For a while he was director of productions( 1965-66) for the Bournemouth Theatre Company, situated opposite the Pavilion Theatre, alongside his friend Paul Elliott, a fellow actor he had met on the set of “Dixon”. 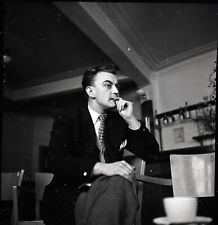 Not long afterwards Paul persuaded Peter to join him in setting up a pantomime company. It was called E&B.The name stood for Elliott & Byrne.

Peter assisted Paul in running the company, performing in pantomimes and directing pantomimes. Soon they began to increase the number of venues, and Peter began to realise that he truly preferred being onstage and directing to being a part of the business side of this blossoming Pantomime Dynasty. Peter continued to work for E&B, the name remained, but he bowed out of management. Paul went on to expand E&B until it presented thirty pantomimes each year- the story of this will be revealed when Paul Elliott publishes his book this Autumn.

Peter Robbins and I were so fortunate to have Peter Byrne as our Director and as our “Daddy”- Baron Hardup when we did our very first E&B Panto “Cinderella” at Stevenage. The one where my Mother travelled many hours to see, and never forgot meeting Peter.

Peter directed and starred in that very first E&B panto in 1983 at The Gordon Craig in Stevenage..Peter (Byrne) would remind us, every time we met over the years of how  that we tried to bribehim- our director-by taking him to tea at The Ritz , to see if we could do a boudoir scene we had been performing the previous two years. It must have been a good tea- we got a boudoir scene, and a further twenty nine odd years of scenes that followed!

Peter was a very fast director. He soon got the show blocked and rehearsed and on- but he never left the wings. After an exit as Baron he would remain watching from the wings for every show- he loved every part of the stage experience. It really was his life.

He appeared and directed many pantos- both in the UK and for Paul Elliott in Vancouver and in Victoria BC.

He gave an interview at Bradford Alhambra for The Telegraph & Argus when he was Directing and appearing in panto. It was gloriously tongue in cheek.

As Director he held the talents of Ronnie Corbett, Jimmy Cricket and Ted Rogers as the finest in Pantoland.

On stage Peter appeared in countless National Tours and was frequently in The West End. He appeared in “The Blue Lamp” onstage, as well as Boeing Boeing, The Unexpected Guest, Deadly Nightcap,Caste,  There’s A Girl In My Soup, Double Edge, Witness For The Prosecution, Move Over Mrs Markham and At The St Martin’s Theatre in The Mousetrap.

I once met him in St Martin’s Lane and we chatted about the play he had just re-joined. I said I thought he wasn’t going to do it again. “Ah yes, “ he said, “But we need an extension on the house!”. In truth wild horses wouldn’t have dragged him away from live theatre. It was everything to him.

Peter Byrne appeared in film, from Reach For The Sky (1956) to Watch Your Stern, Raising The Wind, The Iron Maiden and Carry On Cabby (1963) He was continuously working. 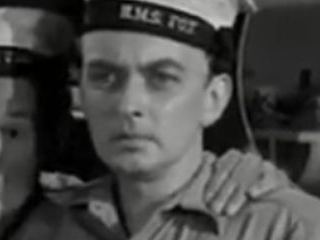 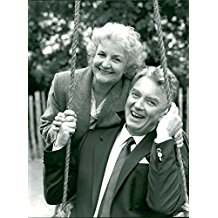 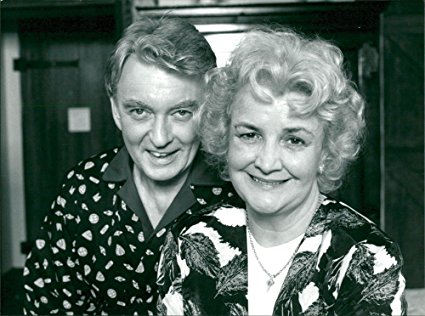 He was in Paul Elliott’s “Run For Your Wife” in The West End, and when Paul wrote a comedy “There’s No Place Like A Home” set in the mythical “STollberg Hall”, Peter joined a cast of celebrities and “old Pro” performers that changed as the play toured. He appeared alongside the likes of Gorden Kaye, Brian Godfrey,Barry Howard, Sue Hodge, Jan Hunt,  Joan Savage, Don McLean, Ken Morley, Geoffrey Davies and Brian Cant. Even the voice of Jeffrey Archer was heard in this madcap comedy set in an actors retirement home.

Peter entered Denville Hall several years ago. He kept in touch with his close friends and family, and saw a lot of both Paul and Linda Elliott. I relished running into Peter- at The Mousetrap, or a great evening catching up at The Mill Sonning, and one very glorious afternoon at Paul’s Birthday Party.

All afternoon I sat on the sofa with Peter and was regaled with his stories and anecdotes about life in the film and TV studios. Stories of taking short cuts thru the studios crossing through the set of “Wicked Lady” in Gainsborough Studios, stories of Margaret Lockwood, James Mason, Patricia Roc, and the film stars of the 1940’s and 1950’s that he met and worked with. Sheer joy. What a wonderful afternoon that was! Sadly, it was the last time I saw Peter Byrne. THAT is how I will remember him. A true man of the Theatre. A joy. Bless you Peter Byrne, and love and thoughts to family and his many friends.