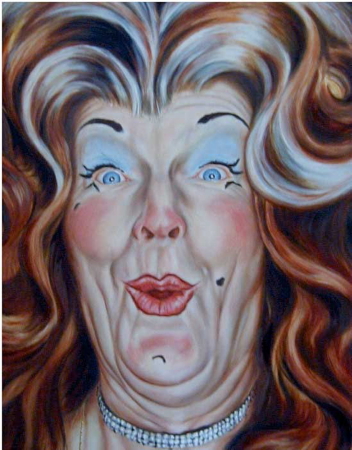 David Morton as Ugly Sister- as painted by Judy Graham

Here at IBY we were saddened to hear the news that David Morton has died. I met David at rehearsal rooms many times over the years, where he and usually Brian Godfrey would be rehearsing for “Cinderella” in one room, and Peter and I would be in another. He had a very long and fascinating career. Our thoughts and love to David’s family, friends and all who will miss him in Pantoland.

David Morton, Actor, Pantomime Dame and Ugly Sister had a career that encompassed plays, musicals, pantomimes and television, starting in the late 1950’s and continuing until his retirement in 2005.

He was known for his Panto partnership with Brian Godfrey for Paul Elliott’s E&B Company, and as Dame- especially Widow Twankey and Mother Goose, for Paul, performing Pantomime both in this country and in Canada. In fact he was one of the first artistes to appear in Saudi Arabia in a touring revue in 1959 alongside Barrie Gosney, who he appeared with frequently.

David appeared in revue with Barrie in 1960 and shortly afterwards went on tour with “The Fol De Rols” revue company for several years. The company included veteran Dame Jack Tripp, and Denny Willis. David met his wife, Barbara Robinson in a show and they toured together in the “Fols” until 1963.

In 1963-64 He played Chinese Policeman opposite Hugh Futcher in The Leatherhead Rep production of “Aladdin” which had John Crocker as Dame and Henry Magee and Alan Rothwell in the cast. His wife Barbara choreographed.

After a season in Stratford for Peter Hall he appeared in the Players Theatre Panto “Ali Baba” alongside Maria Charles, and toured extensively in Musicals- “Robert and Elizabeth”, “Hello Dolly” – as Cornelius with Dora Bryan as Dolly Levi, and in “Blandings Castle” with Jon Pertwee, Peggy Mount and Robertson Hare.

He played his first Dame role at The new Thorndike Theatre, Leatherhead in 1969 as “Queen Coke” in “Sleeping Beauty”. The panto included Principal Boy and West End Star Patricia Michael and Stacey Gregg.

He followed this with a rep season at Leatherhead and appearing in the West End in “Trelawny” with Gemma Craven, Max Adrian and Joyce Carey. This cast included Betty Benfield who was to appear with David frequently in “Cinderella” in the coming years as Fairy Godmother.

In 1973 David appeared as Ugly Sister with Barrie Gosney in Wimbledon’s “Cinderella” alongside Television Magician David Nixon and Basil Brush, and the following year did his first “Sister” for Paul Elliott/Triumph in Toronto Canada. He returned in 1976 with the Paul Elliott “Jack & The Beanstalk” with Lionel Blair, Leon Green and Fiona Kennedy. Barrie Gosney played Dame.

The following year in 1978 David played “Sister” in “Cinderella” opposite Michael Sharville Martin and appeared with his wife, Barbara. The Panto starred Blue Peter’s John Noakes, Peter Purves and Bonnie Langford, and Ward Allan at Guildford.

In 1979 David and Michael played “Sisters” in this production at The Rex Wilmslow, directed by Carole Todd. The following year this E&B Production played Bath with the addition of Ben Warris.

David played Dame- Mother Goose in 1982 in a panto that starred Larry Grayson, Honor Blackman, Dilys Watling and Cheryl Taylor, and again as “Mother Goose” the next year at Cambridge alongside Brian Cant,

As Widow Twankey David appeared at Bournemouth in 1986 alongside Derek Griffiths as Abanazar, Anna Dawson, Anita Dobson as Principal Boy and the “Skeletons Alive!” speciality by Dumart & Denzer.

A season in “Run For Your Wife” at Bournemouth followed with Jan Hunt, Eric Sykes and Terry Scott, followed by Dame in “Aladdin” again at Richmond Theatre with Jeffrey Holland, Anita Dobson, Simon Groom and Janet Ellis in 1987.

In 1990 David appeared in the long running comedy “Pajama Tops” with John Inman, before heading to Plymouth to appear as Ugly Sister in The London Palladium Production of “Cinderella” with Des O’Connor, Peggy Mount and The Simmons Brothers. 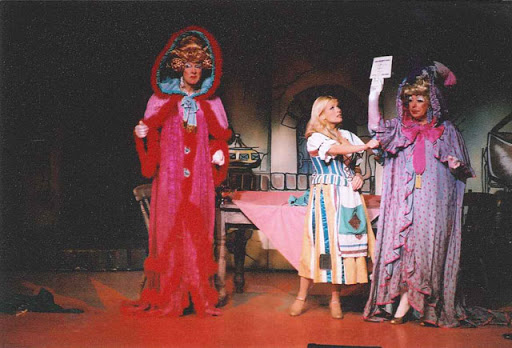 He toured in the comedy “Move Over Mrs Markham” with Debbie Watling, Mark Curry and Peter Dayson before playing “Sister” once more at Woking with Brian Godfrey. He was “Sister” to Brian for E&B Productions for several years. Woking featured Nyree Dawn Porter, Des O’Connor and Jodie Wilson.

David and Brian joined Brian Conley at Southampton in 1993 as “Sisters” joined by Gloria Hunniford as Fairy Godmother, and Ann Sidney as Prince Charming., followed by playing Dame Trott in “Jack & The Beanstalk” at Bath with Britt Ekland, Lionel Blair and Michael Elphic.

David was to rejoin Brian Godfrey the next year-1995 in “Cinderella” at Bournemouth with Les Dennis, Amanda Holden and Kathy Staff .

In 1997 David and Brian played “Sisters” with Danny La Rue as their Mother, The Baroness Voluptua at The Mayflower, Southampton. Brian Conley was Buttons. They repeated this again at Plymouth Theatre Royal.

In 2000 for Qdos David rejoined Brian Godfrey and Danny La Rue at Woking with Bobby Davro and Melinda Messenger in “Cinderella”, repeating the production the next year at Milton Keynes.

In 2004-05 David made his last Pantomime appearance in “Snow White”for QDOS at The Theatre Royal Newcastle. The Pantomime starred Lesley Joseph as Wicked Queen, Peter Piper as Muddles and Kathryn Rooney as Snow White.