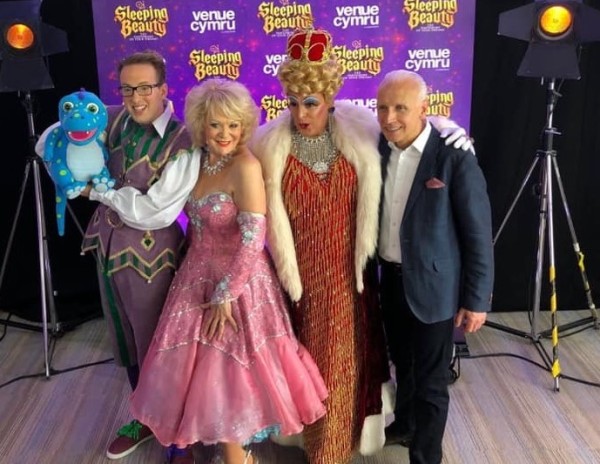 A very jolly day launching Qdos’s “Sleeping Beauty” at Venue Cymru in Llandudno! we travelled up the night before, walked along the promenade in bright hot sunshine (We won’t get that in December!) had a great meal at Osborne House and talked all things Pantomime !

The Press Launch day not so sunny, and in fact, Sherrie emerged from the Hotel to walk the few hundred yards to the Theatre, took one look at the sky and improvised as the heavens opened. This is the result!

The glamour of Show Biz when it rains!

So great to be back here in Venue Cymru- my fourth time in Panto here, and my third with Sherrie- we were previously together in Wolverhampton and in Hull. Sherrie was here very recently in the “Benidorm Live” tour which packed them in to the vast auditorium here in Llandudno.

Our view at Christmas- only then it will be full! Oh Yes It Will!

Jonathan Kiley, Executive Producer for Qdos introduced us to an audience made up of group bookers, The Press and Radio and Television from the region, and in honour of Sherrie, it took place in a “Loose Women” style chat show format.

Jonathan introduced us all, and in my case mentioned I was wearing an historic gown- in fact it was created by designer Terry Parsons for the late, great Danny La Rue. One of my favourite gowns, I rarely get the chance to wear it (Jack’s Mother couldn’t climb a Beanstalk in it, and Snow White’s Nurse would find the train a bit restricting!) but it is Fit for The Queen in “Sleeping Beauty!I bought it at an auction at Brick Lane Music Hall, and it comes with a very large steel constructed “Bustle” that has a life of its own!

Yes- a quick change of frock. There will be around fourteen more at Panto time!

Keiran Powell and his Dinosaur Dave joined in the fun, he joins us in Llandudno as Muddles, The Court Jester. Last year Keiran was in Panto at High Wycombe, and spendsa lot of his working life aboard glamorous cruise liners with his array of Dave’s friends.He’s now been to 101 countries- he must be exhausted!

Sherrie was introduced by Jonathan as our much loved Actress and Television personaity- she has the most amazing back catalogue of Soaps from Emmerdale, Crosroads and of course, Coronation Street as Maureen Holdsworth- The Water Bed scene with Reg Holsworth, Mavis and Derek remains an iconic piece of television!

Sherrie has been associated with “Loose Women” for fourteen years, and our format today saw all of us in a chat format. In fact it became a Banter banquet- there was a lot of ad lib and laughter going on from the first moment- Sherrie and I have been mates for a good while, and Keiran has joined the club. It is going to be a fun run this season! 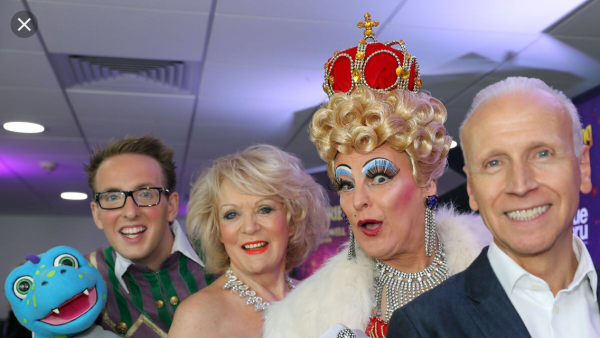 The audience asked us questions, and Sherrie told them about her RADA days, her first film with Richard Chamberlain and a host of stars- “Slipper And The Rose”, leading to “Carry On” films, long running series such as “Love For Lydia”, “In Loving Memory”,through “Lovejoy”, another film “Hanover Street” with Harrison Ford through “The Russ Abbot Show”, Summer Seasons, Theatre productions, a lengthy television run with “Benidorm” and recently playing Mrs Slocombe in the BBC remake of “Are You Being Served”. It is quite a career we’re talking about! After The “Loose Women” style chat show we met the bookers and then (after a swift change of frock) we had photographs, and radio and television interviews in the Deganwy Room, which of course I now own, as I am indeed Queen Myfanwy of Deganwy, and my reign, like the rain in Spain (well.. in Benidorm!) fell mainly on Llandudno seafront. We abandoned outside photos and stayed snacking on a beautiful buffet while engaging the press. Da iown!

The theatre staff looked after us all brilliantly, and special thanks to Richard Jones in Marketing and especially to Sarah Ecob, General Manager of Venue Cymru.

I know from experience what a great time we will have here for Panto- This year will be my 45th Pantomime! (I know, I was Two when I appeared as my first Dame….) and my 37th for Qdos/E&B . Sherrie will certainly know the joys of Llandudno- She is in fact moving here in the Autumn to live near her Daughter Keeley, and Son-In-Law Simon, and her THREE Grand children! So that’s an exclusive!

We both look forward to Showing Keiran around this the Queen Of Resorts we love, and can’t wait for rehearsals to begin. Diolch yn fawr iown Venue Cymru. You did us proud!