Adding To The Archive!

My archive at IBY isn’t just paper- although there are filing cabinets and portfolios full of programmes, posters and photographs, I’ve got a collection of Pantomime objects- my prized “Jack” doll from Jack & Jill- an early “off-sale” from Emile Littler circa 1933 for example.

This week I added this child’s tea set! It is made by Wedgewood and arrived in the original box marked 25 shillings and 6 pence! I paid a bit more than that! It is their “Pantomime” set, and has Goldilocks, Red Riding Hood, Cinderella , Jack & The Beanstalk and other Panto themes. 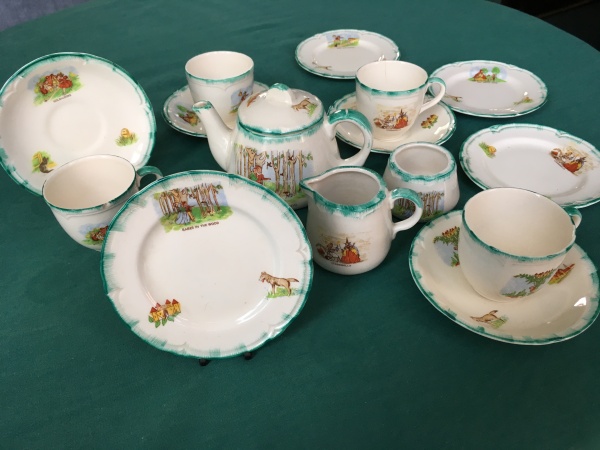 It is amazing that the set is intact, and the box original. I hope some children in the1930’s got to play with it before it was boxed up and hidden in an attic for seventy-odd years! 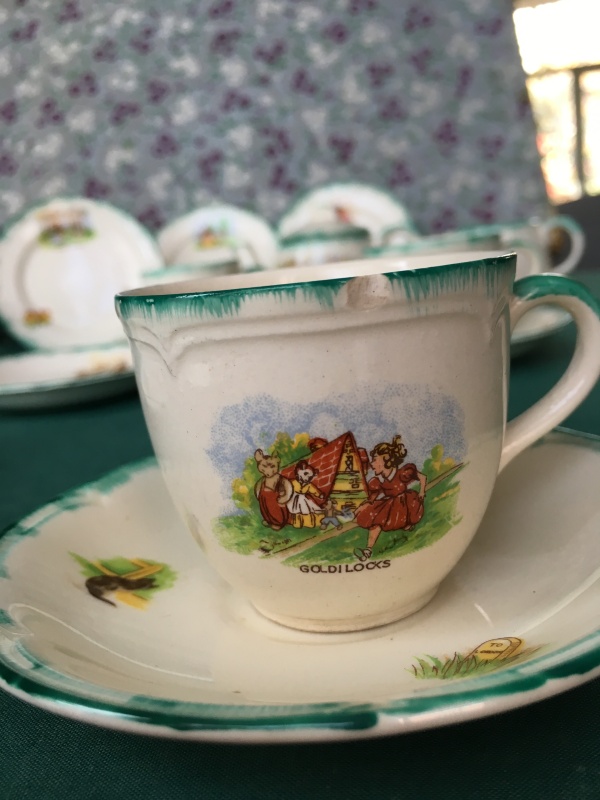 The cabinets are looking over full, but a few recent additions have been “off-sales” again from different eras. 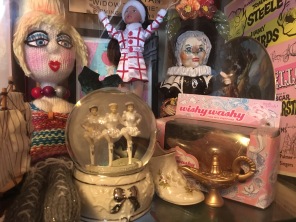 Panto badges have been sold in Theatres since the 1920’s. They’ve fallen out of fashion now- their height was in the 1970’s and early 1980’s. This badge could tear a tissue,or it could crush a grape! The Wonderful Stu Francis, who i had the joy of working with in Darlington in Cinderella a while back.

The other badge shows the late great Ronnie Corbett as Buttons in The Palladium Cinderella in 1971-72. The Third badge is the rarely seen “Puss In Boots” in Her Majesty’s Theatre, Carlisle. This Badge is from the last days of “Her Majesty’s” as The Theatre was briefly renamed The Municipal Theatre  in the early 1960’s and closed in 1963. Like many others it became a Bingo Hall, This closed in 1970, and it was demolished in 1980. A Littlewoods store replaced it… and we know what happened to Littlewoods!

here are two small badges sold in  theatres that starred Mona Vivian. we have a comprehensive article about “Wee Mona” on this site if you want to learn more about this artiste. The link is  http://www.its-behind-you.com/monavivian.html

The Victoria Beckham of her day, in as much as she married the founder of Leeds Football Club and the wealthy pair were feted and honoured everywhere. The badge is from an Emile Littler panto showing Mona as Principal Boy at The Opera House, Manchester. The Badge with the hat was also sold at theatres where she appeared in revue and variety.

Another small badge from “Cinderella” is from Emile Littler’s selection of off-sales in the late 1920’s.

Your Wish Is My Command! A Thimble.

The Thimble is inscribed with the words “I am your Genie. Make A Wish” Aladdin’s lamp is flipped over revealing the thimble beneath. in-Genie-ous! 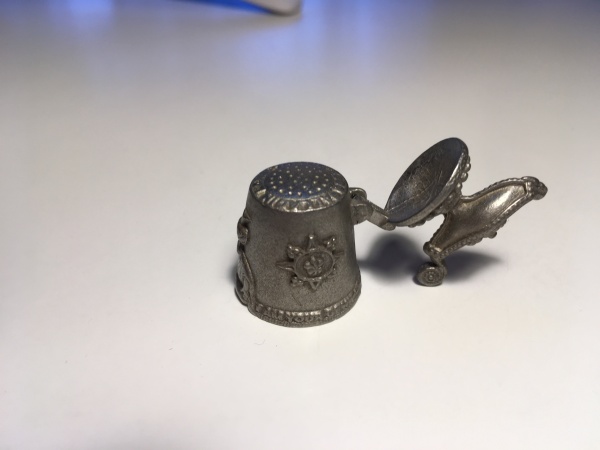 Humpty Dumpty- “OVER THE GARDEN WALL”

A recent acquisition for the archive has been a programme of Humpty Dumpty starring the Dame who influenced Les Dawson, Norman Evans. He starred alongside his comedy pal Betty Jumel. They both appeared in this subject frequently over the years.

This is the cover of the Leeds pantomime with an illustration of Norman Evans as he appeared in his variety sketch- “Over The Garden Wall”.

Norman Evans, With Betty Jumel and (from the Palladium production) Terry Thomas.

NORMAN EVANS– “Over The Garden Wall”

Unquestionably one of the greatest pantomime dames of  his time, and possibly of all time- Norman Evan’s dame was the inspiration for performers like Terry Scott, who decided to go into Theatre after seeing him in panto, and, of course, Les Dawson, who modelled his “Ada” character on Norman’s Fanny Fairbottom.

Born in Rochdale in 1901, Norman began his working career as a travelling  salesman, discovering that a quick and witty line in chat would boost his sales, and began entertaining at masonics and “smokers”. He was discovered by Rochdale’s own Gracie Fields, who, after asking him to audition in her dressing room, and offered him a spot in her show at the Chiswick Empire. Oswald Stoll saw him on the Friday, and booked him for the London Alhambra on the spot. 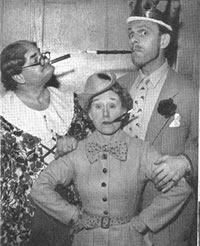 Gracie Fields had toured the country in “Mr Tower of London”, and when it finished in 1935 it was recast with Norman and Betty Driver in the lead roles. (Betty Driver, of course was better known as “Betty” from Coronation Street, but at that time one of the top vocalists). The show was a huge success.

Norman’s best known sketch was “Over the Garden Wall”, in which he created Fanny Fairbottom, the nosy neighbour complete with ample bosom and deficient in teeth. Constantly in mid gossip she would slip off the wall, denting her bosom. “That’s twice on the same brick this week…” Fanny would gossip to an imaginary neighbour about everything that went on in her street. “That Coalman’s at it again.. don’t tell me it takes thirty-five minutes to deliver two bags of nuts!” this was the character that Norman perpetuated in pantomime throughout the country.

Here’s a link to Norman Evans Sketch on Youtube:   https://youtu.be/iQZm3mlaowM

He made his panto debut, as Billy Crusoe at the Chiswick Empire, and played several seasons for Francis Laidler at the London Coliseum. In 1951 Tom Arnold brought “Humpty Dumpty” to the Palladium, with Norman as Dame, Terry Thomas as King, and Betty Jumel “The Bundle of Fun” as Humpty. 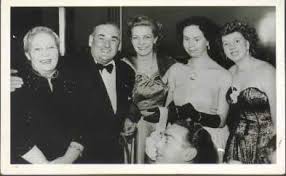 In Variety Norman continued to work with Betty Jumel. He would often play a huge soprano to Betty’s diminutive tenor in an opera sketch. His other famous sketches included a Marcel Marceau style Dentist, and an act with a glove puppet panda- a sort of forerunner to “Sooty”.

Betty Jumel spent her life on tour in variety halls. She was known for her unfailing instinct for the mildly grotesque, as she interrupted herself during a piano recital, or took a drink of water from a vase of wilting flowers. Over more than half a century of performing her craft resulted in her simple, but brilliantly timed acts making her renowned wherever she went. Such was her comic timing that she also appeared in pantomimes in the winter and concert parties in the summer

In 1949 Norman made his first visit to New York, and was a success at the Palace Theatre. He returned to a 20 week Panto season at the Theatre Royal, Leeds, before returning to the States to play the El Capitan Theatre, Hollywood, then onto Toronto. A frequent traveller on the Queen Elizabeth, he enjoyed seasons in Washington and in California over the years. In Britain he appeared in three Royal Variety Performances in 1937, 1947 and in 1951. 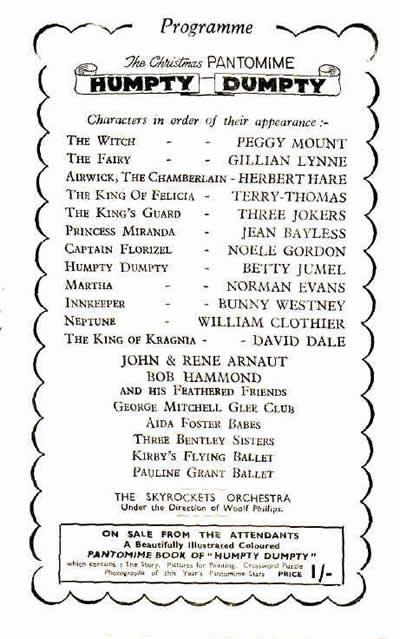 Despite failing health, and his injuries resulting from a car accident, Norman continued to play pantomime and variety across the country and in America. He died in 1962.

My collection was boosted recently with four LP’s from The World of The London Palladium and Coliseum Pantomimes. They speak for themselves! 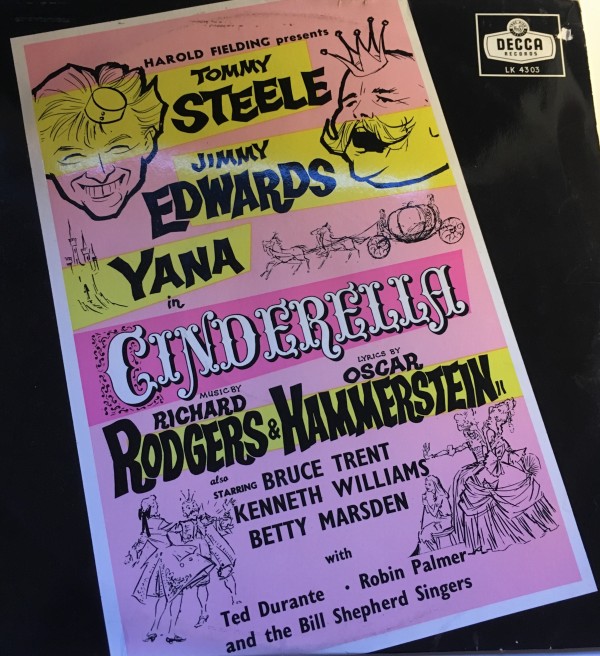 Note Kenneth Williams and Ted Durante as The Ugly Sisters in this Musical version.

This was staged at The London Coliseum.

The London Palladium “Aladdin”  There is a section devoted to The Palladium Pantomimes on this site. You’ll find it in the Articles Section.

Finally Here is a handbill from the Paul Elliott production of “Dick Whittington” at The Wimbledon Theatre. Staged by Carole Todd it had a host of stars in this 1981 Panto including my mate Jan Hunt. I worked with Jan who played Principal Boy and Fairy Godmother over the years we did together, and appeared in several Music Hall shows for her “Paper Moon” Company.

If you look at the Wimbledon Panto Flyer you will see the Langford-Strallen Dynasty starting! Under the title you can see Cherida Langford and Sandy Strallen appearing. They had married in 1980. Both were stars of the original West End production of “Cats”.

Here is a link to youtube to see Sandy & Cherida dancing on Top Of The Pops theyear after this Wimbledon Pantomime.

Bonnie Langford is The Sister of Cherida, and in this Pantomime it is  Bonnie’s and Cherida’s Mother,  Babette who  provides and trains the juveniles, as she always did at Wimbledon as “The Babette Palmer Young Set”

So, just a few recent treasures from the IBY cabinets! Don’t forget to visit the V&A Theatre and performing arts galleries to take a look at the Ugly SistersBallgowns I donated last year- They are glittering away in a case next to Danny La Rue’s Plymouth Aladdin Costume and Clive Rowe’s Hackney Empire Costumes.