It is with sadness that since publishing this article Dame Gillian Lynn died on 1st July 2018 leaving behind a huge legacy of work in this country and throughout the world. 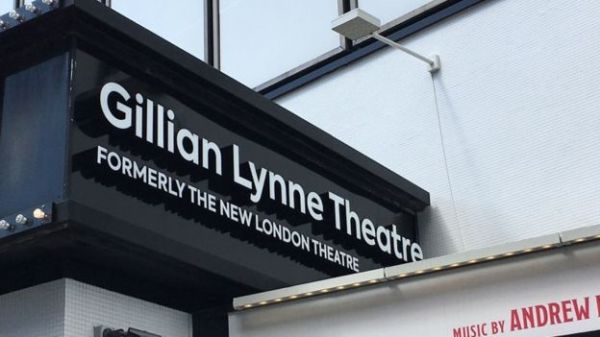 The West End has a New Theatre – The former New London Theatre has been named in honour of Dame Gillian Lynne.

In March 2018  Lord Lloyd Webber announced the theatre would be renamed to celebrate Dame Gillian, choreographer of Cats for Andrew Lloyd Webber and Trevor Nunn. It is the first west end venue to be named after a non royal woman.

The above photograph by Craig Sugden

This theatre has a long association with the Musical “CATS” – the musical premiered here in May 1981 and ran until 2002.

Gillian Lynne was made a CBE in 1997, and created Dame in 2014. She is ninety-one years old, with a career that saw her principal dancer at Sadlers Wells Ballet, and at the Royal Opera House, and Principal dancer at The London Palladium.

She has choreographed and staged Phantom Of The Opera, Chitty Chitty Bang Bang  among her many talents. When I was working at the Haymarket in Leicester it was Gillian Lynne who choreographed the production of “My Fair Lady” with Tony Britton, Liz Robertson and Dame Anna Neagle.  She received a new category of Olivier award for her outstanding achievement of the year in a Musical.

Dame Gillian has appeared in pantomime- her first principal role was as Puss In Boots at The Coventry Theatre in 1957 with Harry Secombe starring and the up and coming Morcambe & Wise as the Miller’s Sons.

The Gillian Lynne Theatre is directly opposite the Qdos suite of offices in Drury Lane.