The Olivier Award for Special Recognition 2018 was awarded to Paul Elliott and Duncan C Weldon, and to “Uncle” Bob west and Meg Johnson.

These four influential and highly respected theatre figures were presented with their awards on Friday 9th March.

Paul Elliott, “King Of Pantomime” – he produced over 487 during his career, founded E&B Productions, which I had the great pleasure of becoming involved with in 1982, when Peter Robbins and I joined the E&B Family for what was to be twenty eight years of Pantomimes as The Ugly Sisters. I have an enormous debt of gratitude to offer him. 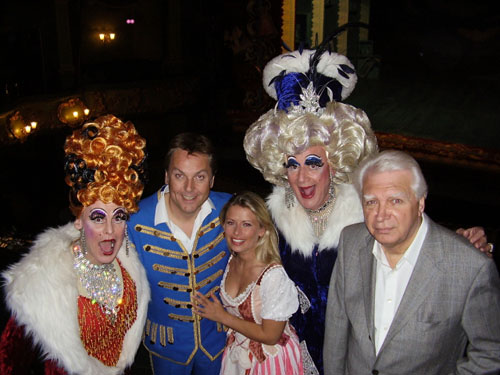 Paul & Linda Elliott. Paul was receiving his Master Of Arts.

Paul has produced Plays and Musicals both in the West End, On Broadway and on International tours, and produced Three Olivier and one Tony Award winning shows.

Paul is about to release his book “Keeping My Balls Up In The Air”, and celebrates Sixty Years in Show Business in June of this year.

Paul and Duncan C Weldon have worked together in Pantomime, and in Plays and Musicals for almost Sixty Years. They have both had an enormous influence in the shape of Pantomimes and London Theatre over these decades.

Duncan C Weldon has brought some of the world’s most prestigious actors to the most prestigious theatres in the world. He has presented 63 plays at The Theatre Royal Haymarket alone!  Triumph Theatre Productions is known worldwide.

“Uncle” Bob West as he is known through The West End of London worked for Cameron Mackintosh for decades. He was a prolific Company Manager and a very lovely man. Bob was best mates with my mate Freddie Lees, and it has always been a joy to meet up with him, and to revel in his encyclopedic knowledge of West End Theatre.Many West End stars today owe their success to Bob West.

Meg Johnson receives her special award for services to theatre since 1958. She has worked in almost every theatre in London’s West End. She has always been there at opening nights over sixty years, and provided jobs to untold numbers of young people who she believed in.

All in all, four VERY special Awards.