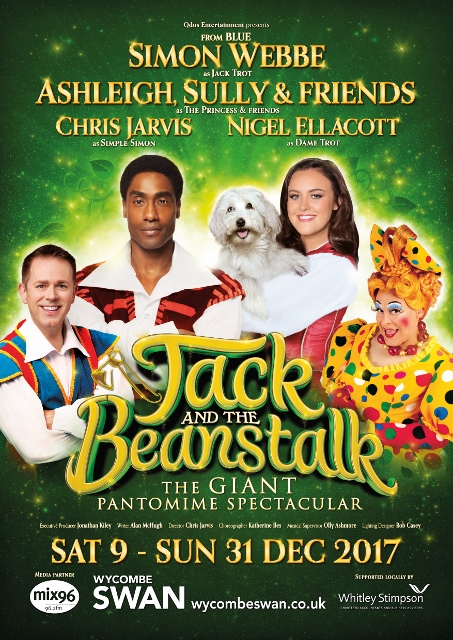 Ten years to the very day, I returned to High Wycombe for Press Day at the Swan Theatre! I know this because Facebook brought it to my attention with the very poignant picture below. 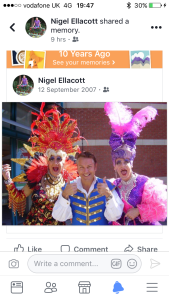 The last time I played Wycombe was “Cinderella”, as Ugly Sister, and here I am as Dame Trott with my mates from last year, Simon, Ashleigh, and Sully , joining my old mate of twenty years Chris Jarvis in “Jack & The Beanstalk”!

Sadly earlier this year the much loved Pudsey died. A beautiful boy, he was joined last year at Northampton with Sully (or Sullivan, to give him his proper name) and we had a great show- you can read last year’s blog if you haven’t already!). I had the great joy of going to Crufts this March to watch Puds in his retirement lap of honour in the Big Arena, and see Sully go on to win in agility- he’s now represented the UK in the same skills in France this Summer. 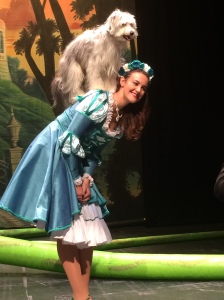 It is not often I am gobsmacked as I enter a dressing room, but Wycombe Swan acheived that! I’d sent my costumes up overnight by courier. I arrived early to unpack only to walk in to the dressing room to discover this!

It may look like a lot of tights and Dame’s bits- but there it was- all unpacked, all beautifully laid out! How lovely- a huge Thank You to the fabulous folk who looked after us! Gloves next to rings, make up out, everything ready to go! We could open tomorrow! 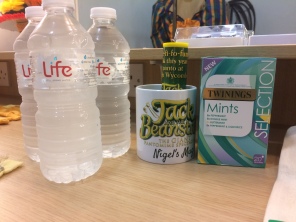 we even have our very own personalised mugs- that’s a first for me! I went to show Ashleigh who had just arrived only to discover Sully had his own dog bowl from the theatre! Here he is looking very delighted!

Adrian LeSurf from Qdos and Mike Green from The Swan looked after us all during the day- The show is produced by Jonathan Kiley. We had photographs and press interviews, along with a live stream from the launch, and a lot of fun along the way!

Great to see Simon and Ashleigh and with Penny Butler again, and to catch up with Chris, and to find a few minutes to explore the building that has so many memories from a decade ago.

we were told that we’d be playing a game today to camera- Bean Boozled. Sounded fine until all was revealed. In pairs we spin a wheel to reveal a choice of magic beans- Jelly Beans. Both the same colour. One nice, one not nice. The winner was the one who didn’t end of spitting out the offending bean. Perfect for a Wednesday up Wycombe. 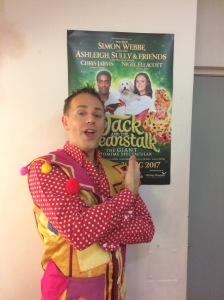 Choices could be “Lime or Grass Cuttings”, or Apricot of Tinned Dog Food”, or “Apple or Smelly Socks”. Smelly socks was the worst. Believe me! Ashleigh won, with Dame Trott second! Sorry Guys, it was a ladies winning combo! Here’s Chris and I in our episode of Beanboozled! 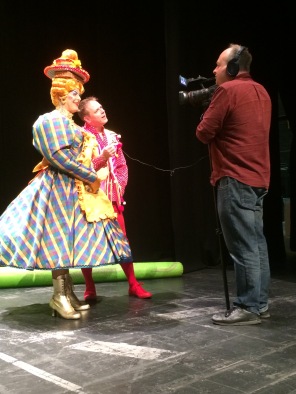 We had a great day, were all looked after just magnificently, and did a fair amount of press before heading back home. Looking forward to a second year with Simon and Ashleigh, and to my first with Chris, and to meeting the rest of the “Jack & The Beanstalk” gang in rehearsals which start on November 27th. Before that I’m off with Andrew Ryan and Grant Alvarez once again with the Autumn tour of The Pantomime Roadshow- visiting East London, Redbridge, Newham, Weymouth, Basingstoke and Llandudno.

Oh and the small matter of completing the costumes for this year’s Kenneth More Theatre’s “Peter Pan”- fittings throughout October! I’ve designed some pretty fun costumes for resident Dame Marc Seymour once again!

Until November, Goodbye Wycombe- and Thanks to Adrian & Mike and all the staff for a great welcome!

Nigel and Chris having a natter

One thought on “The Wycombe Swan Press Launch”