Audrey Maye, held in the highest esteem by all who were lucky enough to work with her, and her late husband Len Howe, passed away today.

She and Len played pantomimes and Summer Seasons together both in this country and in the 1950’s they played Australia and New Zealand amongst other long seasons.She and Len married in 1949. 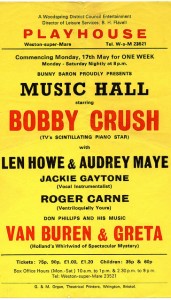 Their act was a joyful mixture of patter, singing, mime, and dance, with Len’s “drunk Act” always in great demand.

Observing a professional Stage Drunk was in Audrey’s blood!  Her Mother, the actress May Warden appeared in the 1963 classic short  “Dinner For One” with Freddie Frinton. It is still, to this day shown every New Year’s Eve throughout Germany, where it is revered as a cult classic comedy.Audrey appeared in a documentary film, alongside Len discussing “Dinner For One” with Freddie Frinton’s widow, Nora in 2003.

Audrey performed “Dinner For One” opposite Freddie Frinton before her Mother. Presented by Robert Luff in 1954/55 at The Jersey Opera House for Edward Kent’s “Starlight Rendevous”.

Freddie wanted Audrey to tour with him in this Sketch, but her double act with Len and family commitments meant she was unable to join him. She suggested her Mother, who appeared in the sketch at Blackpool Opera House and on tour before it was filmed. 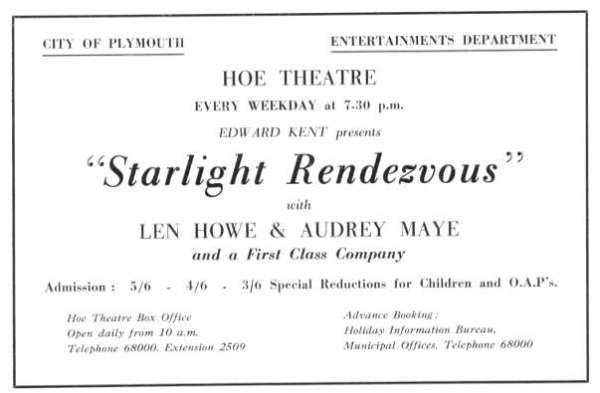 Audrey’s Father was the Actor and Director Sylvester Stuart, and She and Len created a theatrical dynasty that continues in their sons and grand-daughter in plays, musicals and in Pantomime.

In 1973 Audrey was made Queen Ratling in the Grand Order Of Lady Ratlings, and became a Dame of that order. She and Len received the Lifetime Achievement award from the British Music Hall Society.

Len Howe passed away in October 2013.

Audrey helped to run “Roswyn House”, owned by the Grand Order Of Lady Ratlings. Sharon Maxim wrote to tell us:

So many people worked with Audrey and she was loved by all who knew her. Such a generosity of spirit and wonderful sense of humour. We in the Lady Ratlings honoured her with our highest award, a Dameship, but her pride and joy was the house given to the Ratlings by Sir Billy Butlin in 1965 which Audrey helped to run for over 50 years, such was her dedication. Those of us that worked alongside her at Roswyn can’t even begin to imagine the place without her, Thank you for this lovely tribute to her, her parents, Len and all the Howe boys and family. The Roswyn Gals at http://www.roswynhouse.co.uk

Here is a message from the website of roswyn house:

We were all shocked and saddened on 3rd Sept to hear the news that our wonderful
Dame PQ Audrey Maye had finally passed away after a long illness.
She was ‘ROSWYN’ and she loved this house and the fact that it had been so generously given to the Ratlings back in 1965 by Sir Billy Butlin. She fought hard over the years to help keep it going and would proudly show any new members round and let them know that:
‘It was a safe haven for any Ratling to live in if they ever needed to’
She had been a member of the GOLR for over 60 years and had appeared in many of the Ratlings’ cabarets, and in 2009 received the highest honour given by the members of the GOLR, she became a Dame of our Order – it was so very well deserved and she loved being ‘our Dame’.
Back in 2015, Audrey said that Roswyn was the Jewel in the Crown of the GOLR, and she was right, but we say that our Audrey is it’s heart and the heart of the GOLR, and she always will be.
She was the most loving, kind and truthful human being with an incredible generosity of spirit,
a wonderful sense of humour and a zest for life.
She will be missed more than words can say, but she will ALWAYS be remembered in the
Lady Ratings and especially at Roswyn.
In 2018, we intend to hold a special event at Roswyn in her memory, a day full
of love and laughter which sums up Audrey completely.
God Bless our Aud, forever in our hearts. Love From Your Roswyn Gals xxxx 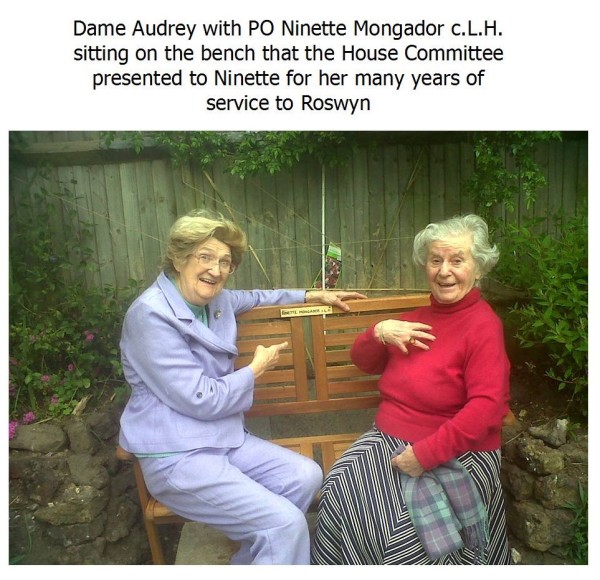 Paul Holman wrote to IBY today with these memories:

Just to say dear Audrey passed away this afternoon.

So many pantomimes. One of the first was with Bunny Baron at Theatre Royal Norwich in Mrs Russell’s ( I think) Red Riding Hood.
Then directed many for Bunny Baron and her and husband Len Howe were ugly sisters in the first pantomime at Fulcrum Slough starring Ian Lavender as Buttons.
Audrey also directed several pantomimes at Lewisham. I saw her play dame at Hastings followed by several seasons at Weston.
Audrey directed and appeared in pantomimes for PHA (Paul Holman Associates) including Jack & The Beanstalk at Hereford , as funny fairy and The witch in Wizard of Oz at Sutton.

Audrey, Len and Simon at Lowestoft “Aladdin” courtesy of the Lowestoft Journal.
Her husband Len who died a few years ago was a celebrated panto dame and comedian. With him she performed a double act which played in India and Australia and all over this country. Topping in Isummer shows, Lowestoft Llandudno Scarborough Felixstowe and Plymouth Folkestone and Bridlington

Her three sons all played in pantomime Michael, David and Simon who is dame for us.
Her grand daughter Mollie played fairy for PHA last Christmas in Lowestoft one of Audrey’s favourite towns.