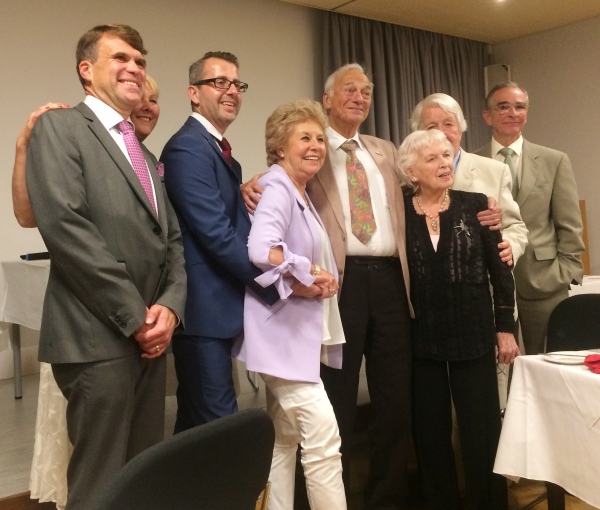 A Crackerjack of a day! The British Music Hall Society’s Summer Tea with Jan Hunt and Dame June Whitfield!

Finally, after so many years we can finally say welcome Dame June! In her own words when she received the OBE she called it “Old But Energetic”, and upon receiving the CBE she named it “Caught Before Expiry”- she is now musing what to call the DBE she will be collecting from Buckingham Palace later this year. I’d say “Dutifully Brilliantly Earned!” 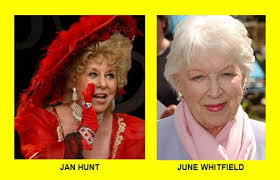 The event- talks by both doyens of comedy and pantomime, and an afternoon tea at the Royal Lancaster Hotel were organised by the BMHS, and it was a sold out full house affair!

Not only was there one Dame in the room but I counted a further six- Pantomime Dames that is- Roy Hudd OBE (President of the BHMS), Wyn Calvin MBE (Vice President of BHMS) along with Adam Borzone (Chairman), Simon Bashford, Andrew Ryan and my good self! 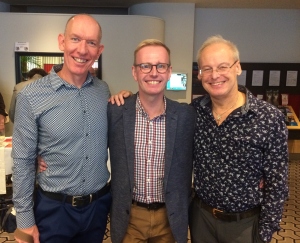 Half of the Dames in the room! Andrew Ryan, Simon Bashford and yours truly!

Jan Hunt was the first speaker, in conversation with Dean Caston, and she spoke about her days as a juvenile in Panto, performing as a double act “Jan & Kelly” in the UK and Australia, and about her West End Musicals, including “Showboat”, Plays like “A Bedful of Foreigners” and “Run For Your Wife”, as well as a year in “The Mousetrap”. 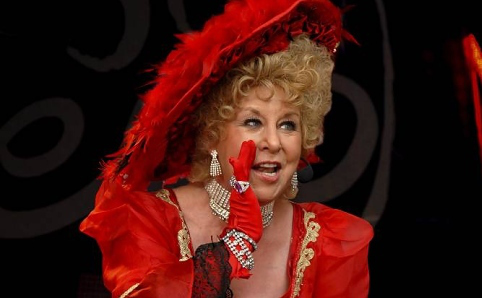 Jan told tales of terrible digs and dreadful gigs as well as the truimphs of BBC’s “Crackerjack”, and her career in Music Hall, both as performer and producer. Jan told us about The Players Theatre, appearances on BBC’s “The Good Old Days” and her love of Music Hall. 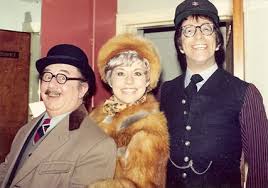 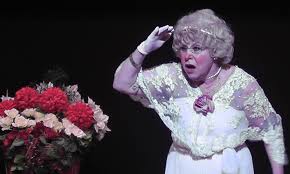 She spoke about her recent productions, bring “Sit Coms” onto the stage with succesful tours of “Dinner Ladies”, “Rising Damp” and the hugely successful “Birds Of A Feather” tours .

She told Dean about her panto career, something I am very proud to have been involved in for about six or so pantomimes with Jan as my Prince Charming from Aberdeen to Wimbledon! 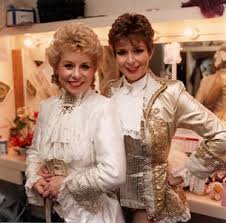 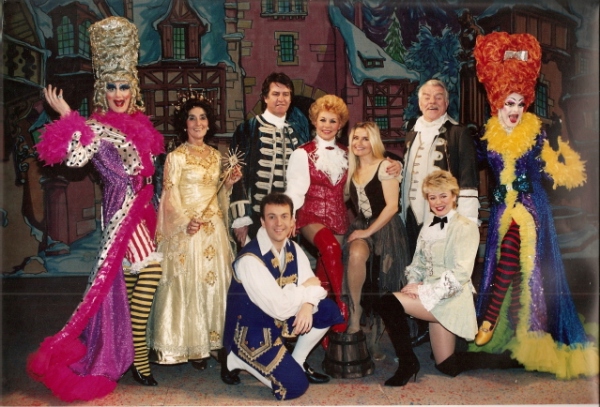 Two pictures from my scrapbook. Early Pantos with Jan and Fern Britton top, and us all at Croydon, alongside June Brown, Windsor Davies, the late Ed Stewpot Stewart,Andrew O’Connor, Amanda Bairstow and Cheryl Taylor with Peter & me.

Jan concluded her talk with a number dear to her heart- “How’d you like to Spoon With Me”? which she sang in “Showboat at the Adelphi alongside Cleo Lane, and sings to this day in her Music Halls, accompanying herself on the spoons! We all got to join in! 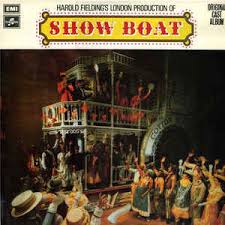 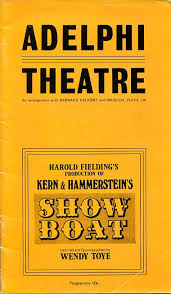 Accompanying her on piano was Laurence Payne, who led Roy and Wyn in aMusic Hall Sing-A-Long before Roy Introduced the Absolutely Fabulous June Whitfield.

Afternoon tea, and more piano from Laurence Payne, and trhe rest of the afternoon in the company of a lady who is our longest serving comedy actress- Seven Decades of laughter, perfectly timed and delivered.

Roy Hudd once said that June has supported and fed so many of the top comedians that she is “The Comics’ Tart!” Her Comedy sparring partners have included Terry Scott, Frankie Howerd, Tony Hancock, Jimmy Edwards and Ronnie Barker to name just a few!

When I first worked with June in Pantomime we left our doors open in Wimbledon so we could pop in and chat, drink tea, and allow access to June’s dog “Rabbit”, who had originally belonged to Jimmy Edwards. Now I leave my door open to allow access to Sullivan, who will be joining our Panto company this year. 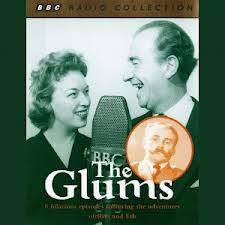 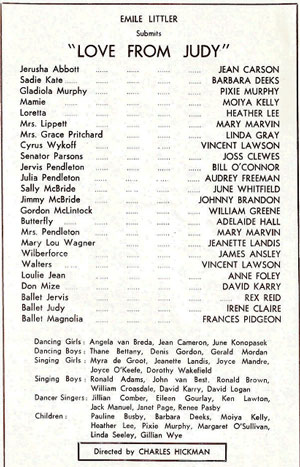 June’s distinctive “Ohhh Ron” catchphrase from “The Glums” is apparently included in The Queen’s repertoire of impressions. Perhaps June will hear this for herself when she collects her DBE this year!

The above “Love From Judy” was an early West End success for June, who had not long left the RADA. The second name on the cast list didn’t do too badly either- little Barbara Deeks “carried On” until she became landlady of The Queen Vic! 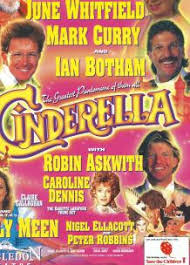 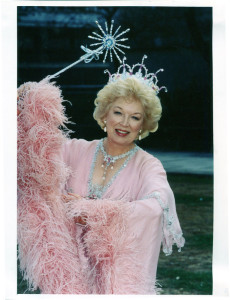 Wimbledon “Cinderella”- incidentally Jan Hunt took over certain performances as Fairy Godmother from June when we did this panto, as June was still filming “Absolutely Fabulous”, so I got to work with both ladies in one show!

June was in conversation with Edward Thomas, and talked about her life in radio, television and films. She recalled The “Terry & June” years, the tours abroad and the “Carry On Films”- four of them.

In Pantomime she began with Wilfrid Pickles at The Alhambra Bradford, having worked with him in a play in the West End. I have the programme in the IBY collection.

June is on the top right, with Pickles in the centre. 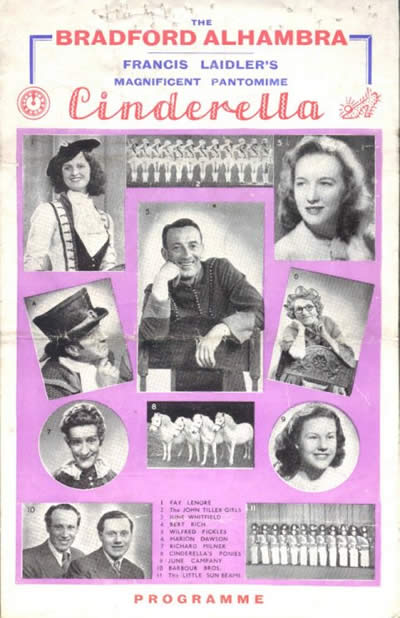 June recalled her times in the “Coward Family” when she appreared in “Ace Of Clubs” for “The Master”, Noel Coward, and in other reviews, and recalled the great cabaret seasons at the Cafe Royal . She and Roy had a discussion mid way through her talk- recalling her “audition” for the News Huddlines while appearing in Panto with Roy. She did one Thatcher impression during the kitchen scene and never looked back! 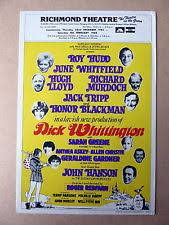 The time flew, and decades of Dame June were still unexplored. This is the second time I’ve enjoyed a June Whitfield talk- the first time was at the Film Museum in South London. I also enjoyed “between shows “chats in panto when we both went through the book “Funny Way To Be A Hero” by John Fisher. June has worked with almost all the comedians in it!

A really great way to spend an afternoon with two fabulous theatrical ladies and a room packed with people who above all Strive to keep Music Hall Alive!

If anyone is interested in finding out more about the BMHS and their programme of events, look at http://www.britishmusichallsociety.com