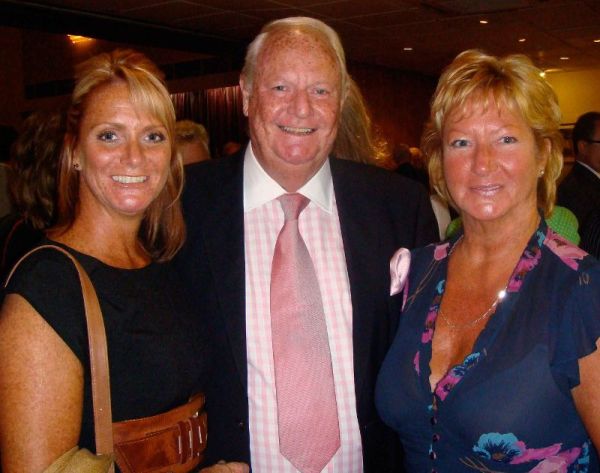 Can it be that we shall no longer experience the fun, smiles and laughter my dearest friend always generated whenever one was in his company? As I am sure it will be the same for all who knew this genial and fun-loving Gentleman of the Theatre, it is with deepest sadness that I came to the realisation yesterday of his passing.

I first met John when I auditioned for a summer season in the days when there were no holiday villages, centres or entertainment resorts, they were called Holiday Camps! I’d answered an advert in The Stage for Brown Coats for Morecambe Bay Holiday Camp and Entertainment Manager Johnny Spillers Esq. For any artist who has ever auditioned for John they’ll know this can be quite an experience! He had me singing song after song for about thirty minutes until I said, “Have I got the job?” “Course you have”, came the immediate response, “I just can’t believe someone so young knows so many (Expletive!) old songs”. Little did we know in 1970 that our friendship would last almost fifty years, he truly was like the older brother I never had.

As with many Panto Producers John was a performer first and producing came later. He learnt most of his trade in what he affectionately referred to as the ‘Rubber-Dubs’ (Working Men’s Clubs) cabaret and of course holiday camps, starting out in Kent and later Morecambe and Golden Sands in Great Yarmouth. His pantomime debut was playing Friar Tuck opposite Hit Parade Legend Craig Douglas who was starring as Robin Hood in Peterborough for the late great Jerry Jerome. That’s when he fell in love with the genre. 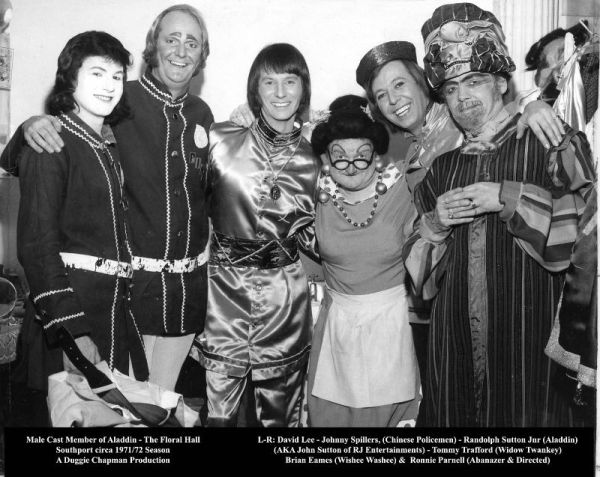 For those who never saw John perform, well you really did miss out. He was a superb comedian but more than this he was a master at working an audience, always very funny, a fantastic ad libber and impressionist. Only John could get a standing ovation for calling the Bingo! Yes I did say calling the bingo, for he turned what is a chore for most holiday camp entertainers into an entertainment experience! It might have been a holiday camp but he presented five variety shows in the camp’s theatre each week with star guests on Sundays who were invariably appearing in Blackpool for the summer. There was also a straight play and a farce! I learnt more about the business, it’s rules, traditions, policies and comedy timing in three months for John that season than if I’d had a scholarship to a top theatre school for three years.

John persuaded the recently departed Impresario Duggie Chapman to book me for Southport with him and Tommy Trafford as Uglies. They were great days no-one got rehearsal pay then by the way! The cast camaraderie was fabulous, after the show the entire company would go to a bar and the entertainment continued with sing-alongs and the telling of wonderful theatrical stories of the greats of the past like Miller, Randle, Formby and Clitheroe etc. We then went on to appear in two more pantomimes together as Chinese Policemen in Southport and Bury St Edmunds.

By the late 1970’s John had decided to make a career change and was Entertainment Manager for the Maidstone Borough Council running the 388 seat Hazlitt Theatre when he asked me if I’d be interested in being his Assistant? I held the position for three years and over that time Pantoni Productions was created when he and I produced the Hazlitt’s six-week pantomime. I left to run Pantoni commercially and John stayed until retiring, then becoming a commercial pantomime producer himself, and as they say… the rest is history. Spillers Pantomimes is a true family-run business, his lovely wife Kay and family always the most precious aspects of his life have been an integral part of the successes of the company he was so proud to head. Spillers Pantomimes continues to provide excellent ‘Family’ entertainment for countless hundreds of thousands of people continuing I’m sure John’s legacy and his diligence in setting many a young theatrical hopeful on the road to a successful career. 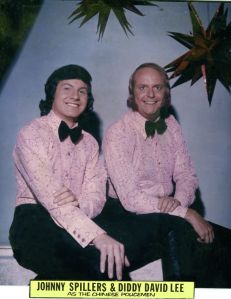 One reads the cliché’s so often; he was a legend, a gentleman, a true showman, a very funny man etc, and although all that is true, if I may I’d close with the immortal words of the one and only Max Miller – “There’ll never be another!”

Facebook has had some tributes to Johnny Spillers: Here is one from Father and Son, Rusty Goffe and Ben Gambrill: 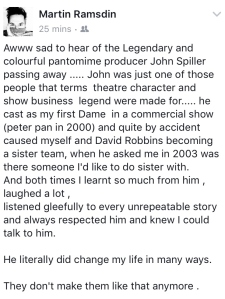