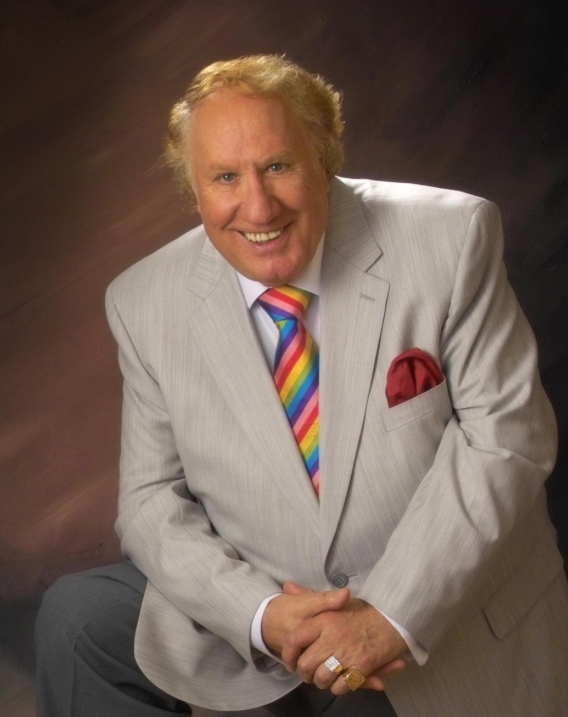 “The Delfont Of The North!”

Duggie Chapman who died on Saturday, a day after celebrating his 81st Birthday was a prolific producer of Pantomimes in the UK. In the mid ‘70’s he was the biggest producer of panto with over eleven productions in venues, or on tour over Christmas. 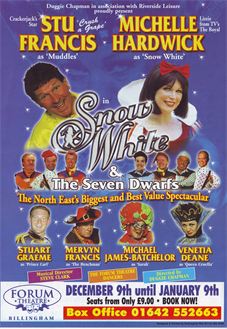 Over his 50 year plus career he presented over 400 pantomimes, as well as Music Halls, variety and Summer shows both in the UK and abroad.. A familiar sight at theatres arriving in his Rolls Royce, cigar in hand and a magnificent sense of humour. He was the man who kept an awful lot of artistes in work over a very long time. The tributes from these artistes, many of them now stars have been pouring in.

Duggie was born in Burnley, and became a full time resident of Blackpool with offices on the South Shore from 1962. 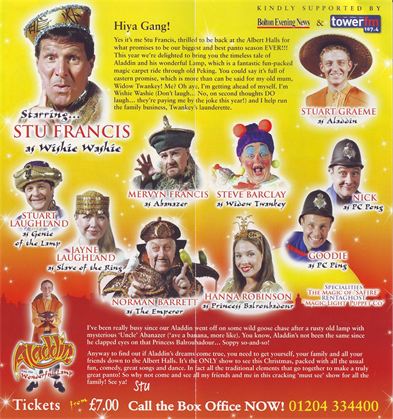 He not only presented Panto, but played comic and later Dame in several. His first pantomime appearance was, aged 22 in 1958. A year later he would produce his first show in Jersey. His last appearance as a performer in panto was 1973. By this time Duggie was producing eleven pantomimes, and the luxury of performing each year was no longer possible. 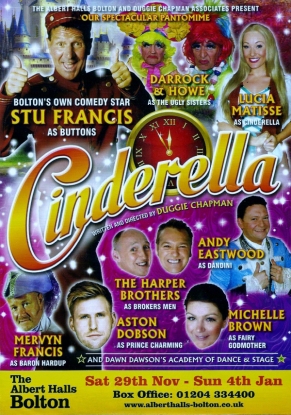 Duggie had started as a child actor. At eleven he appeared in “The Cure Of Love”, and aged Fifteen he was one of “The Four Blue Pages”, a harmony group. By 1955 at the age of 19 he was with Ken Wilson in “Piccadilly To Paree” as a young comic, venturing into the “Naught But Nice” shows such as “The Girlee Show” followed by tours in variety.

Throughout his career he presented Variety and Music Hall. His “Duggie Chapman’s Music Hall”,was  brought to theatres at “E-Nourmous Expense!” toured almost continuously from 1964 for thirty five years! 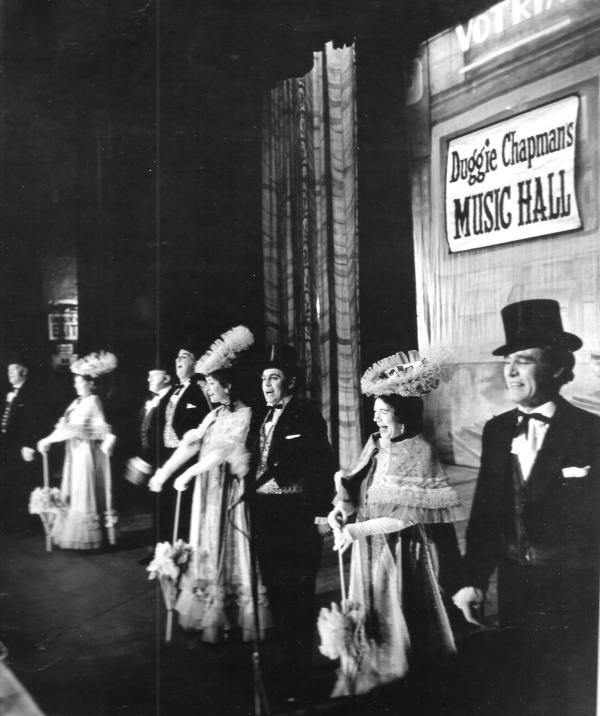 I first saw these shows as a schoolboy at Swansea Grand Theatre, and the artistes appearing were Duggie’s “rep” company- all “turns” who worked for him all year round, and then went into his pantomimes, before setting off for tours and Summer Seasons. He was very loyal, and so were they. These shows were to me very glamorous and an insight into a world of showbiz that l knew I had to join someday. Thank you Duggie! 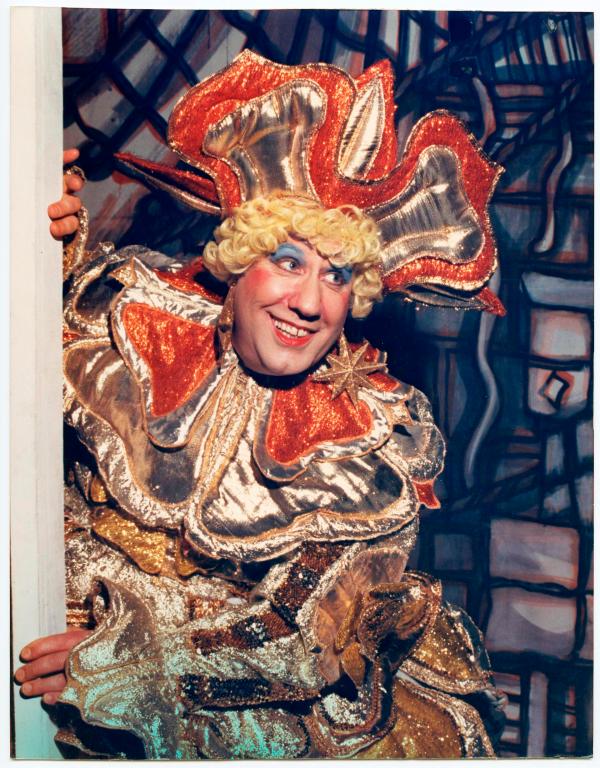 By this time Duggie was a regular broadcaster for the BBC. He made over 100 Broadcasts in shows like “Variety Playhouse”and “Workers Playtime” as a comedian.

The following Year he was not in a pantomime, but touring and Broadcasting.

1961/62  Duggie appeared as comic in “Babes In The Wood”  in Blackburn for Joe Collins. Joe was the Father of Joan Collins,and was a prolific producer. The show was looked after by Davy Kaye . Duggie appeared alongside veteran Dame Billy Wells as Nurse, with The Harrison Twins and Brian Stone. This panto played three weeks at Blackburn and a week at St. Helens.

1962/63 he appeared in “Ali Baba” at The Dudley Hippodrome. This panto was extended and ran until February 10th 1963. There were two glamorous Dames- Terry Bartlett (of Bartlett & Ross fame) and Terry Durham.

1963/64 Duggie played Simple Simon in “Jack & The Beanstalk” in Kidderminster alongside Bert Ward as Dame and The speciality “The Flying Paulos”.

In 1964 Duggie Chapman’s Music Hall was toured throughout the year. He compered his show that Christmas at The Alhambra, Morecambe.

1965/66  Duggie played his first Dame. He was Dame Durden in “Jack & The Beanstalk” as well as producing. The panto was on tour and played Scunthorpe, Skegness and The Cavendish Cinema Nottingham.

1966/67 Duggie produced and appeared in “Puss In Boots” at The Richmond Theatre London. He played Queen Penelope. Many of the cast were members of his Music Hall that played Richmond during the year. They included Alec Bregonzi and Lucy Fenwick, who played “Puss”.

1967/68 Duggie returned as Dame to Richmond,in “Babes In The Wood” He was again joined by Alec Bregonzi and Lucy Fenwick. His Old Time Music Hall  continued to play the theatre. 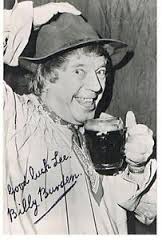 1969/70 Duggie presented pantomime at The Civic Theatre, Barnsley. He played Ugly Sister with Tom Howard  in “Cinderella”. Tom Howard was a regular performer in his Music Hall, often appearing in drag as Florrie Forde. Joining the company was Ken Platt (his catchphrase “I won’t take my coat off, I’m not stopping!”) along with Bryan Johnson (Brother of Teddy, and also a Eurovision contestant) with Jean Barrington as Prince and Esme Ash. Ken played Buttons with Bryan as Baron.

1970/71 Duggie Chapman presented and appeared at The Civic, Barnsley as Dilys Dumpling in “Red Riding Hood”, alongside Ken (“Settle Down”) Goodwin as Simple Simon. Clinton Ford played the Squire.

The star of this panto was a local lad- Dai Bradley. The film “Kes” directed by Ken Loach was released this year, and starred the now 16 year old as Prince. He had just left school, and following this panto was to join the Royal National Theatre to train and appear in seasons at the Old Vic, and later appearing in “Equus” in the UK and in America. His most recent film is the 2013 “Hummingbird” with Jason Statham. 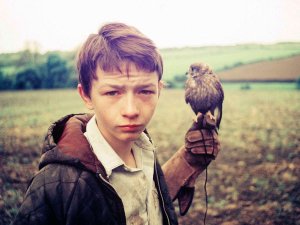 This Christmas  saw Duggie  also presenting “Cinderella” at The Floral Hall, Stockport. His role as “Sister” was given to Johnny Spillers (later panto producer) and Tommy Trafford (Later Panto Producer ) along with Marie Ashton as Dandini.

1971/72  Duggie  played WidowTwankey in his third year as Dame at Barnsley Civic, which he produced. It was “Aladdin”.

This season starred Bobby Bennett as Wishee Washee, and “The Man In Black”- Valentine Dyall as Abanazar. Dumarte & Denzer presented their Black Light speciality “Skeletons Alive!”, and Ping & Pong the Chinese Policemen were played by The Harman Brothers. A name change a few years later saw the Harmans rechristened The Chuckle Brothers. 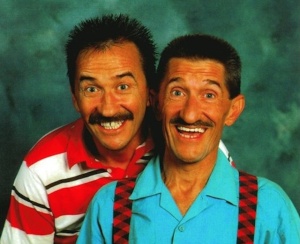 Jean Barrington played Aladdin and the role of Princess was played by my friend Suzanne Kaye. This was her Pantomime debut in her local theatre- she went on to join Duggie’s touring Music Hall and Summer Seasons afterwards.

The pantomime rehearsed up until Christmas Eve, and then the cast returned to open on Boxing Day, as did most pantomimes at the time.

Suzanne remembers Duggie Chapman’s Dame as “ A lovely Dame. He was a warm, comfortable Motherly dame with a wicked twinkle in his eye”

This twinkle was often in his eye, and she remembers how he made her feel at ease in her very first panto. “He was a joy. You never saw him lose his temper, and he was kind and supportive. He made you laugh a lot..”

“If we were out or in a pub or a reception and someone had cornered him or was boring him, he had this code word. It was Brentford. He’d call you over and say ‘Suzanne, have you seen Mr Brentford recently? Or ‘Have you been to Brentford lately?’ that was his signal to be rescued! “

Duggie made Suzanne comfortable enough to ask her back the year, and to join his Summer Seasons. She continued to do over twenty more pantomimes and summer shows.

During this panto season Duggie was also producing a further two pantomimes at Southport, and at Bury St Edmunds. Once again Johnny Spillers and Tommy Trafford were in Cinderella and Bobby Kent was Dame for him at Bury St Edmunds.

1972/73  This was year four at Barnsley for Duggie Chapman. It was also his last pantomime season appearing as Dame. The pantomime was “Babes In The Wood” with Duggie playing Nurse Glucose.

The star this year was Ian Lavender. At 26 he was one of the stars of “Dad’s Army”, watched at times by 20 Million viewers. He played Muddles with Peter Cavanagh “The Voice Of Them All” playing the Sheriff of Nottingham. Brett Stevens was Robin Hood alongside Suzanne Kaye as Maid Marion.

The cast included Merry Men played by Dave Lee as Will Scarlett  (later to become a Panto Producer) and Peter Tracey (previously a double act of Smart & Tracey) along with magician Mike Scott. The Good and Bad Robbers were Charlie Grey and Eddie Davies. The latter part of the panto was affected by National Power cuts, strikes and shortages.

Suzanne Kaye  recalls this pantomime as the one that took place during a period of regular power cuts. The Matinee might have full lighting, but then the evening would see reduced and emergency lighting, with candles (backed with baco foil) put as footlights to boost the secondary lights!

After this year Duggie would find it impossible to perform in pantomime, as the number of pantomimes he was producing each year was increasing.

In 1973/74 he presented “Jack & The Beanstalk” at Barnsley with Ken Platt, “Aladdin” at Bury St Edmunds with John Spillers and David Lee along with Jean Barrington, and a touring panto “Goldilocks” at St Helens and Southport.

By 1974 he had Ten pantomime productions, and was hiring sets and costumes from his Blackpool Costume House and store. He had Nine Theatres and One Club on his list this year- Barnsley, Bury St Edmunds, Harlow, Margate, New Brighton, Scunthorpe, Southport, Sheffield and Weymouth.

In 1975 he added an Easter Panto to his collection- “Cinderella” at St Helens. 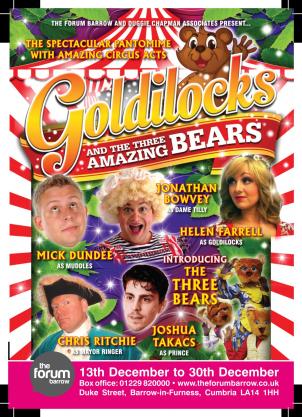 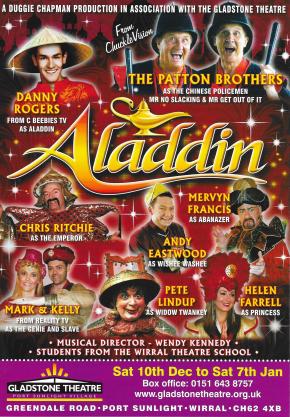 Here is an interview Duggie gave to a newspaper several years ago, about his thoughts on pantomime.

To this day Duggie, at the age of eighty, continued to produce and direct pantomimes all over the country. He received the British Music Hall’s Lifetime Acheivement award in 2008 and was made an MBE in 2009 for his services to light entertainment. 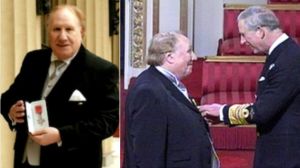 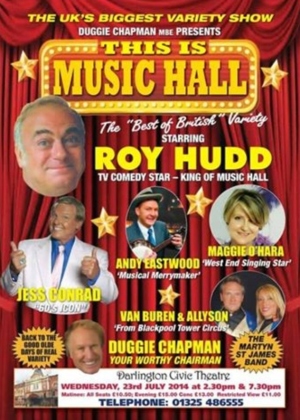 The stars of his music halls included Sandy Powell and his wife Kay White, Elsie and Doris Waters, Adelaide Hall, Derek Roy and in pantomime his stars included Stu Francis who appeared in so many Bolton pantomimes for him, as well as Jimmy Cricket , Charlie Cairoli, , Barnaby, The Patton Brothers and Keith Hopkins. 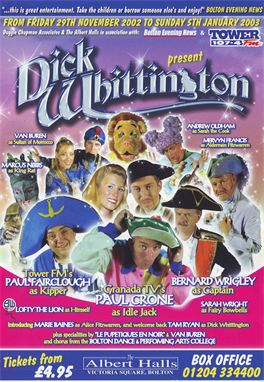 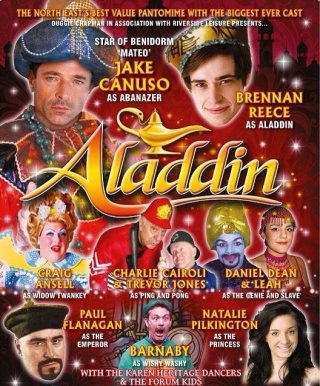 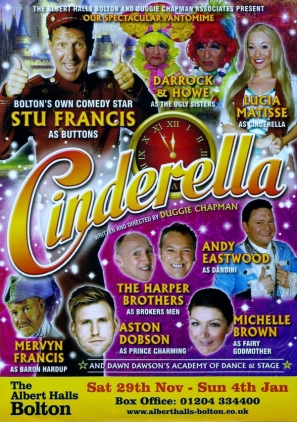 One name appears on Duggie’s panto bills a lot- Mervyn  Francis, who has directed, co-directed and performed in over twenty of Duggie’s Pantomimes. Here is a link to his website:

The proof of a good man is the company he keeps- Duggie kept a fine and a loyal company. His casts were his friends, and remained working with him for year upon year. His Music Hall and Panto casts contain the same names each year. Here are a few from The Swansea Grand seasons: 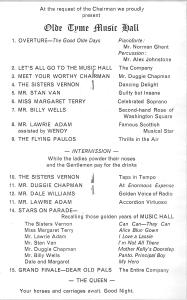 That twinkle in his eye never left him. Locally his shows at the Lowther Pavilion Blackpool were regular attractions. The theatre managers became his friends.

Our thoughts here at its-behind-you.com go to his wife Beryl Johnson  and to all those in Pantoland who miss this jovial and talented man who loved and  lived Pantomime. 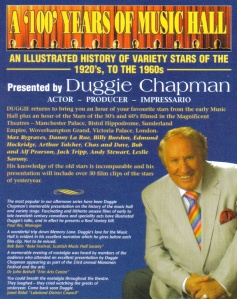 One thought on “SPOTLIGHT ON DUGGIE CHAPMAN”