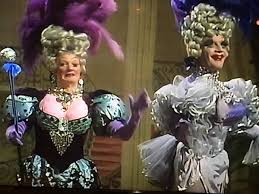 The Good Old Days! recently the BBC have been repeating random episodes of “The Good Old Days” from the mid 1970’s. The world of panto gets a very good look-in with Arthur Askey, Terry Scott, Jan Hunt, Ken Dodd and the like, but last week the made in heaven partnership of Inman & Howard was shown! 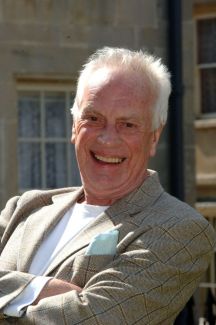 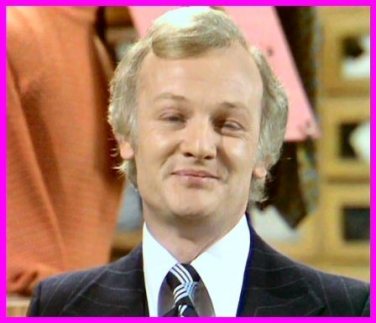 Barry and John were Ugly Sisters in “Cinderella” before fame called John to star in “Are You Being Served” and Barry to “Hi Di Hi”.

They both Formed a partnership in the early sixties as Ugly Sisters. They were first put together by Arthur Lane in his tour of “Salad Days”, and worked together in plays such as “Job for the boy”, “Boeing Boeing”, “Doctor In The House” and “At Sea” as well as in Pantomime and Music Hall. They appeared on BBC’s “The Good Old Days” as two buxom Principal Boys from Panto, and delighted audiences around the country as the Ugly Sisters in “Cinderella”. They were an Ugly Sister partnership for over eight years  before becoming solo Dames in pantomimes throughout the UK.

Here is a link to a facebook site where their “Good Old Days” routine can be enjoyed once again!

BARRY HOWARD was born in Nottingham and went into repertory, and appeared in the West End as Sir Andrew Aguecheek in “Twelfth Night”(1964)  at the Comedy Theatre, and as Mr. Sowerbury in “Oliver”.(1964-65)  Both he and John Inman appeared individually in many seasonal comedies and farces.They teamed up after a tour of “Salad Days” in 1964. After their partnership as “Sisters” finished, Barry, like John went on to appear as Dame in pantomime, and became a household name in “Hi Di Hi” as the lugubrious ballroom dancer, Barry Stuart-Hargreaves. He had started his career at Butlins after learning Ballroom Dancing at school.

Barry appeared at London’s Victoria Palace in 1983-84 in “Hi Di Hi- The Holiday Musical” Toured in “Scrooge” the musical with Anthony Newley, and opposite Tommy Steel as Marley. He was frequently Narrator in “The Rocky Horror Show”.I had the pleasure of costuming Barrie in one version of “Rocky” at the BIC in Bournemouth.

JOHN INMAN was born in Blackpool, and made his first professional stage appearance aged 13. On Television he worked with Hugh Lloyd, Roy Kinnear and appeared in televisions first colour musical “Titi-Pu” with Harry Worth, Hattie Jaques and Richard Wattis. His West End debut was in the musical “Ann Veronica”, and appearances at the “Windmill” Theatre, followed by playing Lord Fancourt- Babberley in “Charlie’s Aunt” at the Adelphi Theatre.

John went on to find fame as “Mr Humphreys” in BBC’s “Are you being Served”, adopting the show’s catchphrase “I’m Free!” as his own, as he created one of the most outrageous characters seen on the screen. He continued to tour in farces, notably “My Fat Friend”, and in Summer shows and seasons throughout the UK. The Success of “Are you being Served” made him an international star, with a big fan following in the States.  John also appeared in the follow-up to “Are You Being Served” on television, “Grace and Favour”. He  appeared in six Royal Variety Performances.

John Inman became one of the country’s top pantomime Dames, and appeared in over forty pantomimes. His inventive and pristine costumes, often designed and created by him, together with his mastery of the role made him one of the finest Dames to tread the boards. He specialised for a while as “Mother Goose”, just as George Lacy had before him, and appeared in that role at the Victoria Palace, and as Nurse Wanda in the London Palladium’s panto, “Babes In The Wood” John has frequently appeared in “Aladdin” and one of his last Dame roles was Widow Twankey at the Theatre Royal, Newcastle. He sadly died in 2007.

Here is an abridged version of his obituary from The Guardian in 2007. Written by Dennis Barker.

John Inman, endeared himself to millions as the outrageously camp menswear shop assistant in the 1970s BBC television series Are You Being Served.
Inman’s Mr Humphries was, against stiff competition, one of the most arresting characters on the staff of Grace Brothers department store, created by the formidable comedy writers Jeremy Lloyd and David Croft (Croft himself had once worked in a department store). The show was first tried as a pilot in the BBC Comedy Playhouse slot in 1972. It ran at peak time for 12 years from 1973 to 1985 – a total of 69 episodes.

The large and anachronistic family business at its heart was run on traditional lines by a doddering “Young Mr Grace”, and staffed by oddities like Mrs Slocombe of ladies’ wear, played by Molly Sugden, who was always prattling on about her “pussy”, and a floor manager, Captain Peacock (Frank Thornton), who was invariably referred to by his military rank. Inman’s suggestive catchphrase, when asked to attend to a customer, was “I’m free,” after which he would set about measuring an inside leg with attentive enthusiasm. He become instantly recognisable in the street and was constantly asked, “Are you free?” “No, but I’m reasonable,” became one of his stock ripostes.

Are You Being Served? made Inman famous not only in Britain but also in the US, where the series was sold. He was recognised in Los Angeles as much as in London. Once, in San Francisco, a young man fell off his bicycle because he was so surprised to see Inman, and lay in the road shouting “I love you, Mr Humphries.”

Before the success of that one role, however, Inman’s impact had been modest. He was born in Preston, Lancashire, the son of two hairdressers who moved to Blackpool to open a boarding house. His parents financed his elocution lessons at the local church hall, and he made his professional debut at 11 on the South Pier, Blackpool. The Jack Rose Repertory Company paid him £5 a week to play a boy in the drama Frieda.

But it was showbiz rather than acting that had the greater appeal for Inman. “I’m a tits-and-feathers man really,” he explained. He loved the Tiller Girls, and blamed the Beatles for making showbusiness less glamorous. At 17, he left Blackpool for London to become a window dresser. To augment his income, he sewed garments for theatres and lived in a £3-a-week bedsit. At 21, he joined the repertory company at Crewe as an actor, and made his first West End appearances in Anne Veronica, Salad Days and Let’s Get Laid (which, he had to explain to his mother, was about a poultry farm).

Summer shows became his speciality, alternating with more than 40 appearanaces as the pantomime Dame. Instead of “resting” he sometimes went back to shop-window dressing. In 1977, ITV offered him an exclusive contract and his own show, Odd Man Out, but the divorce from the BBC was not a success, and it ran for only seven episodes. So Inman returned to the corporation and Are You Being Served? Seven years after the final episode, five of the characters returned for a sequel – Grace And Favour – but there were only two series.

By this time, however, Inman was secure as a national comic treasure. In 2005 a poll found that the 1977 film of Are You Being Served? was the worst ever feature film remake of a television series – but his reputation had never been dependent on the cinema, and the television episodes continued to sell around the world.

Inman suffered from poor health. In 1993, he was hospitalised with bronchitis. In 1995, he collapsed during a performance of Mother Goose, and in 2004 he had to withdraw from Dick Whittington at Richmond theatre.