Brian Conley surprised on stage at the Birmingham Hippodrome by Michael Harrison!

Brian Conley was about to make his curtain speech at the end of this evening’s performance of “Barnum” at the Hippodrome Birmingham, when co-producer and head of Qdos Pantomimes Michael Harrison stopped him in his tracks. 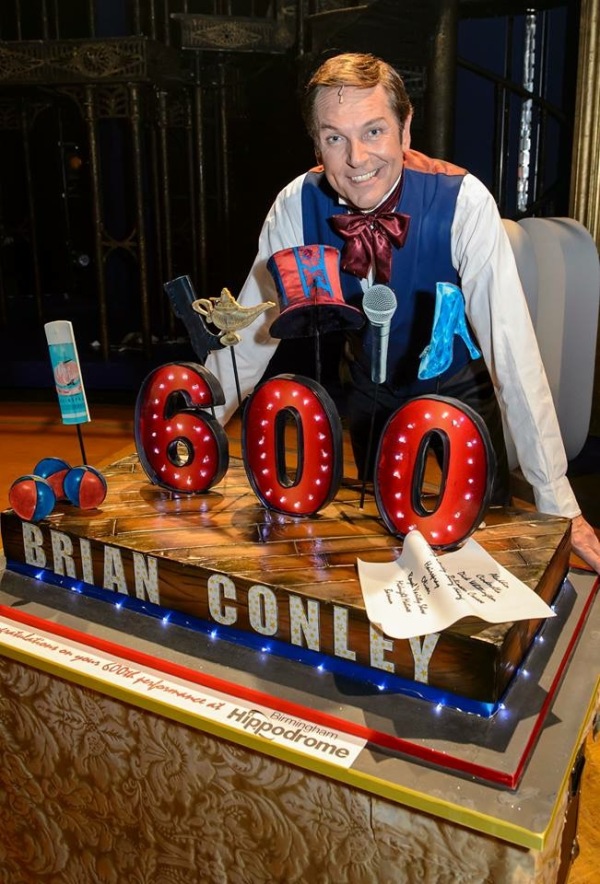 Tonight was, it turns out the 600th performance that Brian has made on this historic and beautiful stage. At the end of the show he was presented with this amazing cake, created by Birmingham based Cake Moda. It has the boards of the stage, with Brian’s name (in lights, obviously!) and symbols of his many triumphs at this theatre- a slipper from “Cinderella” , a lamp from “Aladdin”,”Dick Whittington”,  symbols of Jolson and the many musicals he’s performed here.

Brian Conley, centre with Michael Harrison and the company of “Barnum” currently on tour around the UK and playing Birmingham Hippodrome this week.

I was fortunate to be a part of this 600 celebration, in as much as I shared about 80 of those 600 appearing in 2006/7 in”Cinderella” alongside Peter Robbins, with Shobna Gulati, Dawson Chance, Sean Needham, Michelle Potter, Jody Crosier and the most wonderful company manager, my friend the late Ian Sandy.

Photographs courtesy of The Birmingham Hippodrome

Peter & I were with Brian’s “Cinderella” on quite a few pantomimes- Southampton, Manchester, Plymouth, High Wycombe, but that magical Birmingham Hippodrome show took some beating. I’ve seen Brian at the “Hippo” in a good few shows and pantomimes, and recently met up with him and Anne Marie when I saw “Barnum”- a fabulous show, and a great one to celebrate 600 performances at this beautiful theatre! Congratulations Brian- in Jolson’s words, “You ‘aint seen nothin’ yet!