Taking a look through some more flyers or hand-bills in my collection, I came across Yvonne Marsh. The first bill has Yvonne appearing with Freddie (parrot-face) Davies as “Aladdin”. The second bill shows her as a Principal Girl- “Goody” in “Little Miss Muffet”  for Emile Littler at the Empire Theatre Leeds.

one of the country’s leading Principal Boys- often billed as “Britain’s Favourite Principal Boy”.The  photograph below shows a group of Principal Boys taken in 1969. Yvonne is far right.

She appearing that year as Aladdin at the Hippodrome Bristol with Bernard Bresslaw and Freddie Davies, along with the Dallas Boys as can be seen in the first flyer here. 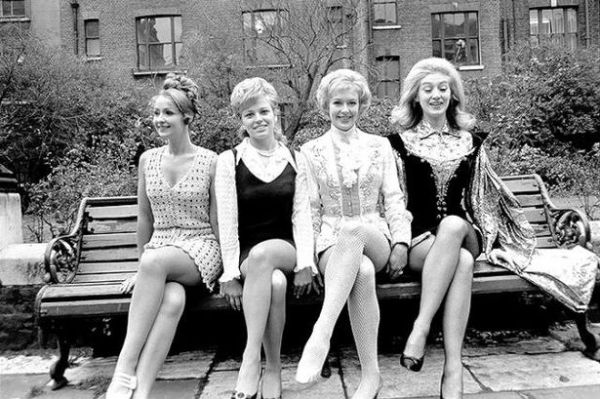 Yvonne was a veteran of Stage Screen and Pantomime- having started in films as a child, and appeared in the title role of “Goody Two Shoes” for Emile Littler at the Casino Theatre London in 1950 playing opposite Arthur Askey and Charlie Cairoli.

Yvonne, the sister of actress Jean Marsh of “Upstairs Downstairs” fame, began in British films such as “The Little Ballerina” in 1947. Her film career included appearing in the 1953 Bio-Pic on the life of Gilbert & Sullivan, and in “Come Dance With Me” in 1956 opposite Max Wall, Barbara Hamilton and Anne Shelton. She made a small appearance in the original film “Casino Royale” in 1967.

Yvonne is currently the Cover Girl of the British Music Hall Society’s Journal “Call Boy”, and there is an excellent interview with her in this by Geoff Bowden.

In 1964 Yvonne had been leading lady in “Round About Piccadilly” with Max Bygraves at London’s Prince Of Wales Theatre. Other musicals included “The Water Babies” at the Royalty Theatre London and numerous television and theatre appearances in variety.

Well known to viewers from BBC’s “You Rang M’Lord”, Yvonne played Madge Cartwright in the series alongside Jeffrey Holland, Su Pollard, Paul Shane and the company.

Yvonne appeared in major pantomimes, often for the Delfont organisation, and among her many seasons were Bristol Hippodrome “Aladdin” with Rod Hull & Emu, Birmingham in “Jack & The Beanstalk” with the Batchelors and Frank Carson, “Babes In The Wood” with Hughie Green and Monica Rose, The Empire Liverpool with Norman Wisdom and Birmingham Hippodrome with Roy Hudd and Charlie Williams in “Robinson Crusoe”. She directed several Pantomimes at the Theatre Royal in Norwich.

Yvonne is a stalwart member of the Grand Order Of Lady Ratlings.

One thought on “Past Panto Handbills-Yvonne Marsh”