Here at IBY Simon & I were delighted to receive this Studio Theatre Award for services to Independent Theatre. 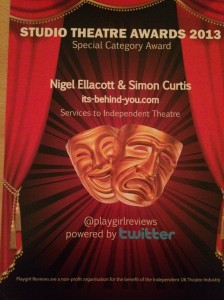 The results were announced in January this year, and were as follows:

Thanks to everyone who voted for its-behind-you.com and we are very proud to be able to provide this service. Our thanks to Qdos for supporting and sponsoring us over the past fourteen years!